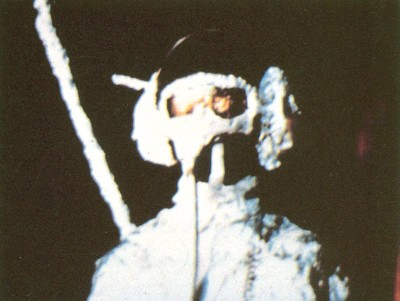 Most photographs of alleged UFOs are of dubious origin; "hoax" may be too strong a word. Many are simply jokes, such as this one in which a prankster dressed in outlandish garb passes himself off as a visitor from another world.
Intercontinental U.F.O. Galactic Spacecraft Research and Analytic Network Archives

Mon-Ka is many people's favorite Martian. According to one chronicler, he "has a wisdom that is light years beyond the most intelligent person on our planet."

Mon-Ka first communicated with earthlings in April 1956 at the Giant Rock Spacecraft Convention in Southern California, when contactee Dick Miller played recordings that he said had mysteriously appeared on tapes in sealed cans. On the tapes Mon-Ka asked a favor and made a promise: "On the evening of November 7, of this your year 1956, at 10:30 P.M. your local time, we request that one of your communications stations remove its carrier signal from the air for two minutes. At that time we will speak from our craft, which will be stationed at an altitude of 10,000 feet over your great city of Los Angeles."

When the evening of November 7 rolled around, the faithful climbed to the rooftops and scanned the skies. As publicity gimmicks two radio stations went off the air at the appointed hour, and a television station sent out a plane to look for the Martian spaceship. Mon-Ka did not show up.

He was not, however, gone for good. Since then Mon-Ka has channeled psychic communications to numerous contactees. Today he is beloved as a tireless (and garrulous) "soldier for the cause of peace," in the words of one admirer.