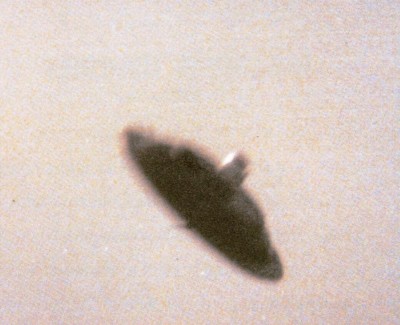 A government report called this "one of the few UFO reports in which all factors investigated . . . [are] consistent with the assertion that an extraordinary flying object . . . flew within sight of two witnesses." A further mystery is whether or not the occupants were clothed.
Intercontinental U.F.O. Galactic Spacecraft Research and Analytic Network Archives

Two outlandish yet similar tales told half a century apart seem to indicate that aliens may at times appear nude. On April 19, 1897, the St. Louis Post-Dispatch printed a letter from one W. H. Hopkins. Three days earlier, near Springfield, Missouri, Hopkins encountered a beautiful nude woman standing outside a landed "airship." As he approached, a similarly clad man stepped up to protect her. Though neither being spoke English, Hopkins convinced them of his peaceful intentions. Asked where they came from, they "pointed upwards, pronouncing a word which sounded like Mars."

On March 28, 1950, Samuel Eaton Thompson reportedly met up with nude Venusian men, women, and children in a forest outside Mineral, Washington. Friendly but childlike, they spoke "uneducated" English. Whereas Hopkins' Martians were sweating in the spring temperatures, Thompson's Venusians were cold because of the respective distances of the two planets from the sun.