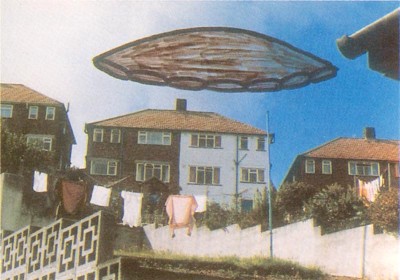 As in this illustration, UFOs have been reported in neighborhoods, cities, and rural areas throughout the United States.
Fortean Picture Library

Driving near Montville, Ohio, late on the evening of November 6, 1957, Olden Moore was startled to see a glowing disc, 50 feet high and 50 feet in diameter, come down along the roadside. He got out of his car and watched the landed UFO for the next 15 minutes. It was still there when he left to get his wife, but it was gone when they returned. Police and Civilian Defense investigators found both "footprints" and radioactivity at the site.

A few days later Moore disappeared. When he resurfaced, he would not say where he had been. But in private conversations with ufologist C. W. Fitch, Moore claimed that Air Force officers had flown him to Washington, D.C., and hidden him away while they repeatedly interviewed him. Toward the end of his stay, the officers showed him a UFO film, apparently taken from a military plane, and said UFOs seemed to be of interplanetary origin. Moore then signed a document swearing him to secrecy.