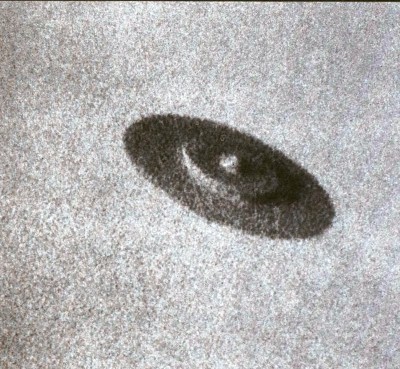 This daylight disc was photographed for Brazil's O Cruzeiro on May 7, 1952, over Barra Da Tiguca. While critics have thoroughly debunked the image, UFO reports of this type are far more common than those of space animals.
Fortean Picture Library

In the late 1940s and 1950s some theorists thought flying saucers might be space animals. The first to suggest this idea, however, was Charles Fort, in his 1931 book Lo! where he speculated that unknown objects in the sky could be "living things that occasionally come from somewhere else." A few days after Kenneth Arnold's sighting on June 24, 1947, John Philip Bessor wrote the Air Force to tell it what the flying discs were: a "form of space animal" propelled by "telekinetic energy."

These creatures might be carnivorous. "Many falls of flesh and blood from the sky in times past," he declared, could be the leftover remains of unfortunate persons eaten by hungry UFOs. In 1955 Countess Zoe Wassilko-Serecki theorized that UFOs were "vast, luminous bladders of colloidal silicones" that feed on electrical energy. Californian Trevor James Constable claimed to have photographed these "critters," as he called them, on infrared film.