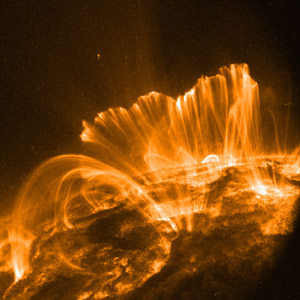 In March 2011, scientists from the United Kingdom, Finland, France, Belgium and Spain announced the formation of a project called SPACECAST. The project's purpose is to detect, study and forecast space weather. But these scientists aren't interstellar meteorologists.

Space weather isn't the same as our weather here on Earth. You're not going to get a space forecast of partly cloudy with a chance of showers. Instead, your weather report might sound like something out of a science-fiction film. Rather than precipitation, you'd be looking at gamma radiation and magnetic fluctuations.

Why invest in a project like this in the first place? Because the weather in space affects us. In general, space weather refers to the energy and particles that our sun emits. Without our sun, life on our planet wouldn't exist as we know it. But not everything from the sun is beneficial to life.

Our planet's atmosphere shields us from some of the most harmful radiation from the sun. That includes X-rays and gamma radiation, both of which are high-energy forms of radiation that can strip electrons off of atoms, ionizing them. We're relatively safe from this radiation on the ground. But what happens if we're on a plane? Or what about astronauts, who may be in low orbit or even further out from the planet's surface?

In addition to the risk to human life, space weather can cause harm to electronics. Energy from the sun can muck up everything from satellites in orbit to power grids here on the ground. Let's take a look at how the sun can make the world go dark. 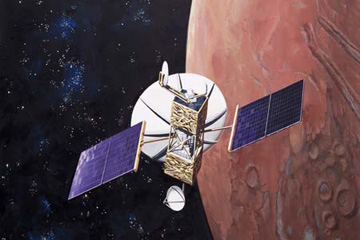 Communications satellites like this one are vulnerable to space weather.
NASA Glenn Research Center

There are approximately 900 active satellites in orbit around Earth [source: Union of Concerned Scientists]. Launching a satellite is no small matter. It can cost millions of dollars to develop a satellite, construct it, and place it into orbit. Satellites need occasional boosts to remain in orbit. That means engineers have to factor in the weight of fuel on top of the satellite itself.

Space weather can decrease the lifespan of satellites in many ways. If the sun emits a coronal mass ejection (CME), the radiation and particles can interfere with satellite operations. Ionizing radiation can weaken a satellite. The energy may also heat up the atmosphere, making it expand. A satellite in low orbit could experience atmospheric drag and be in danger of falling without a boost. Since there's a finite amount of fuel aboard a satellite, each unplanned boost decreases its useful life.

The magnetic shockwave that accompanies solar activity is also a problem. Unless a satellite is shielded properly, the magnetic fluctuations could induce electricity within the satellite itself. The satellite might not respond to commands properly or it might give erroneous readings to ground control. Among the particles traveling from the sun during a CME are electrons. Even a single electron can cause problems if it penetrates a satellite's shielding.

Many military satellites have thick shielding -- why not apply that to all satellites? The answer to this question boils down to risk versus reward. Shielding adds weight to a satellite. That means the satellite will be more expensive to launch and, depending upon the orbit of the satellite, it may need boosts more regularly than lighter satellites. If the expense of putting the satellite into orbit is greater than the benefit of having it there in the first place, it doesn't make sense to launch.

What the SPACECAST project hopes to do is study the effects of solar activity on satellites with the goal of designing future satellites to be resistant to those effects without escalating costs. Part of SPACECAST's mission is to create early warning detection systems that might allow satellite operators to adjust a satellite's orbit or power down nonessential systems to minimize the effects a solar storm might otherwise have on the device. With enough notice, operators could also reroute satellite communications to other satellites that aren't in the path of a solar storm.

We've already seen what can happen to a satellite as a result of solar activity. On Jan. 20, 1994, two communications satellites called ANIK E1 and ANIK E2 suffered internal failures because of deep dielectric charging. Electrons moving with intense energy penetrated the shielding on the satellites and caused malfunctions. It took eight hours to regain control of E1 and seven months to bring E2 back to service [source: Horne].

The dangers don't end there. Should we have astronauts in orbit during a solar storm, they too would be vulnerable to solar activity. SPACECAST will help determine the type of safety measures we need to consider to keep astronauts safe during solar events. That could include creating safety rooms inside spacecraft and space stations that have thick shielding as well as procedures designed to shut down nonessential systems during a solar storm.

The sun's activity can also affect electronics here on Earth. Next, we'll look at how a solar storm can shut down a power grid.

There's a fundamental relationship between magnetism and electricity. If you've ever built an electromagnet, you've seen this in action. A simple electromagnet consists of a coil of copper wire wrapped around a core -- iron nails work well. Attach the ends of the copper wire to a battery. Electrons will flow through the copper wire and generate a magnetic field. You can use the copper-wrapped nail as a magnet.

The sun can produce incredible magnetic fields. During a solar storm, the magnetic force expelled by the sun is strong enough to change the shape of the Earth's magnetosphere. We call this a geomagnetic storm and it can wreak havoc on large electrical systems. Smaller systems, like your smartphone or computer, tend to be safe. Normally, solar storms only affect large conductors. But those large conductors can interfere with the operation of smaller systems.

A surge in electricity on a power grid is bad news. It can damage transformers and even snap power lines as more electricity surges through the system than it was designed to handle. In 1989, a geomagnetic storm caused malfunctions in Quebec's power grid. There was a complete blackout for about six million residents for nine hours. The total cost to the HydroQuebec system was $6 billion [source: Horne].

SPACECAST will help European nations predict when a geomagnetic storm will occur. In theory, it will give nations valuable time to adjust power grid loads to prepare for oncoming magnetic fluctuations. In the future, smart grid approaches may allow engineers the chance to distribute power loads in such a way that it doesn't disrupt customers.

Magnetic fluctuations in the ionosphere can interfere with high-frequency radio transmissions. That can include signals sent by GPS satellites, which could affect us on Earth -- your trusty GPS navigation system might not be able to determine your actual location as a result.

The Mysteries of Space Weather 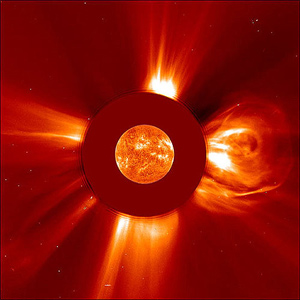 An image of the sun captured on April 2, 2001, by the Extreme ultraviolet Imaging Telescope (EIT) during the biggest solar flare ever recorded.
NASA Goddard Space Flight Center

Besides protecting assets on and above Earth, SPACECAST will push scientific research. There is much we don't know about space weather. The gaps in our knowledge make it difficult to prepare for solar events.

Take coronal mass ejections (CMEs). These events occur when the sun shoots out enormous amounts of mass. They often coincide with particularly large solar flares but we don't fully understand the relationship between the two. A CME can push electrons, protons and heavy nuclei from the sun at speeds approaching the speed of light. Electrons, boosted by energy due to the intense heat of the sun, travel along magnetic field lines. If the CME faces Earth, those electrons can hit us in a shock wave well before the loop generated by the CME hits us.

Scientists want to learn more about CMEs and why they occur. We need further studies to determine exactly where and how they form on the sun. It's also important to learn why particles from different types of CME events travel at different speeds. Only by knowing these details can we create an effective warning system.

Not every CME results in a geomagnetic storm here on Earth. That means we need to learn what factors feed into the types that do affect us so that we can differentiate between a harmless event and one that could cause headaches here at home.

Another area of scientific study is the behavior of the Earth's magnetosphere. It's difficult to create experiments that give us meaningful data -- most of our knowledge comes from direct observation. As a result, there's much we don't understand about the Earth's magnetic field, particularly when it's influenced by space weather.

That's just the tip of the iceberg as far as scientific studies go. But the scientists working on SPACECAST hope to investigate these mysteries and design systems capable of providing us useful information in the event of potentially dangerous space weather. Without this knowledge, all we can expect are semi-educated guesses. 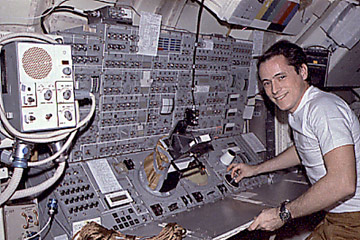 A space warning system is vital to protect astronauts in orbit. This is astronaut Ed Gibson on Skylab-4.
NASA Marshall Space Flight Center

For SPACECAST to work, Europe must invest in sensors both in space and on the ground. There are several independent sensor systems located in countries across Europe. But these systems depend upon separate sources of funding to stay active. Should the system in one country go offline due to lack of funds, Europe would lose a significant part of what could be a comprehensive warning system.

For that reason, scientists like Richard Horne have recommended a project like SPACECAST to unite these efforts. Not only will a unified approach mean better communication and data collection, but also security in the face of financial cutbacks. Much of SPACECAST's appeal is due to its potential financial impact. To make SPACECAST viable, scientists had to convince politicians that Europe's own warning system could save countries billions of dollars in losses.

In the past, Europe relied on programs like NASA to warn of solar storms and geomagnetic activity. But those systems don't dedicate focus to Europe. The scientists responsible for SPACECAST argued that a European project will provide better protection than a general program. At the same time, SPACECAST scientists will work with NASA to share information and build knowledge.

There are several industries that could benefit from a warning system besides power companies and organizations operating satellites. Companies that drill for gas and oil use magnetic readings to guide instruments. A geomagnetic storm could introduce instrumentation errors, which could lead to mistakes costing billions of dollars. And the airline industry might reschedule flights based on solar activity -- at higher elevations, the Earth's atmosphere provides less protection against harmful solar radiation.

SPACECAST will be an evolutionary project. Before scientists can implement a full warning system, they will have to study the effects of radiation belts and solar activities on satellites. They'll need to build on our understanding of the sun's activity and when we might expect to feel the effects of a solar storm. But it's a step toward ensuring that solar activity won't adversely affect Europeans' lives.

Learn more about solar events and space by following the links on the next page.

Why a Blue Moon's Not Really Blue
Can You Have a Baby on Mars?
Gazing at Celestial History Through the James Webb Space Telescope