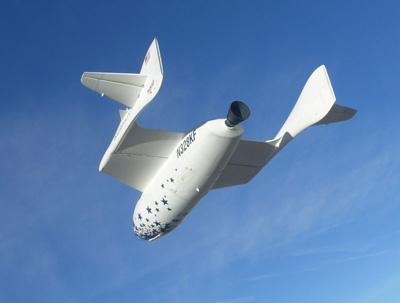 SpaceShipOne is designed carry a pilot and two passengers into sub-orbital space. In our conversation with Matthew Gionta, we asked what a passenger could expect from a ride on SpaceShipOne.

HSW: Could you explain to our readers what it would be like to ride in SpaceShipOne?

M. GIONTA: It's the wildest roller coaster you've ever ridden on, and I may be stealing a quote from my boss [Burt Rutan], but I think he's got a good characterization of it there. If I were to describe the acceleration going up ... you've got gravity pulling down on you. There's 1 g of acceleration, but you're actually moving vertically at two or more g's. The pilot feels about 3 g's -- eyeballs in, as we call it; your back is feeling three times the weight of your whole body -- and so, pretty strong acceleration going up. When the motor shuts off, now there's drag on the vehicle but no thrust, so you fly forward in your seat belts until they're holding you out there in space; otherwise you'd be flying through the front window and out the front of the craft. So you're suspended in your seatbelts at that point, and that's for maybe 5 or so seconds, and then you kinda fall down into the seat. And at that point, the g is continually decreasing until it's about zero g, and you've got about 4 minutes of weightlessness as you go over the top, then coming back, and while you're up there the view is spectacular.

Some of the views you've seen of Earth from low-Earth orbit satellites or even from the space shuttle at some of its lowest altitudes are essentially the exact same view you get out of the window of this craft. And we've got some spectacular footage on our Web site...

... [So you've] got a few minutes of weightless before you start coming back in the atmosphere. It's a loud, rumbling, shaking, lots of g's, peaking at maybe 6 g's. And it gets pretty hard to even stay conscious at that point, but you can do it if you're in pretty good shape and you've trained for it. And then, you fly out of that as a glider, and it's just a peaceful glider ride. You've got another 15 minutes or so to sightsee as you come back in, realizing you just went to space. You earned your astronaut wings ... That's the altitude to qualify as an astronaut.

M. GIONTA: See, it's pretty cool. We think there are a lot of wealthy people who would be willing to pay the amount of money we think it's going to take, to go take a ride.

HSW: And then the idea of course, eventually, is to make this more and more cost effective until...

M. GIONTA: Yeah, who knows where this extends? Maybe it extends to orbital space tourism, right? I think that's a logical progression. It'd be kinda cool to take a little vacation in space, don't you think?

In the next section, we'll look at the design of the White Knight craft that assists SpaceShipOne on its journey.