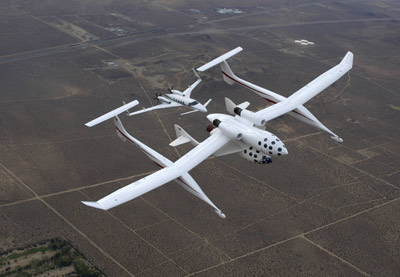 As we learned from Matthew, SpaceShipOne can't make a journey to the stars alone. It requires the help of a carrier ship called the White Knight. One of the greatest expenses and dangers in space travel comes from launching spacecraft from the ground. Just the cost of the fuel needed for a ground launch is extraordinary. In order to streamline the process, SpaceShipOne launches from the belly of White Knight at an altitude of around 50,000 ft.

The White Knight, which made its debut in April 2003, is a high-altitude, twin turbojet research plane. Its primary job is to serve as an aerial platform to launch SpaceShipOne into space.

To add additional realism to SpaceShipOne pilot training, the White Knight was designed with a high thrust-to-weight ratio and powerful speed brakes. These features help to simulate space flight maneuvers.

As an airplane, White Knight is a remarkable craft all on its own. According to Scaled Composites, White Knight's unique design also makes it well suited for "reconnaissance, surveillance, atmospheric research, data relay, telecommunications, imaging and booster launch for micro-satellites."

In the next section, we'll take a look at the SpaceShipOne craft.