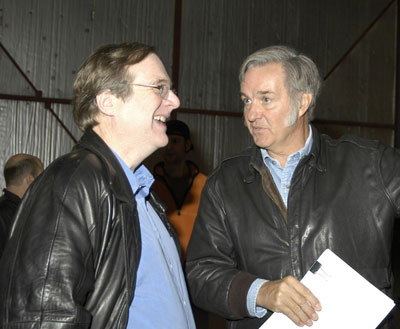 Scaled Composites CEO Burt Rutan and Microsoft co-founder Paul G. Allen are spearheading the effort to prove that safe, economical, commercial space travel is possible. This effort has taken shape in the form of the privately funded, fledgling space program known as Tier One.

Rutan is known for many accomplishments in the field of aeronautical engineering. Among them is his design of the aircraft Voyager. Voyager was the first plane to fly around the Earth without refueling. As the team leader, Rutan has committed himself to proving that Tier One is a feasible space program by building a ship that can carry people into sub-orbital space. Allen is committed to providing the funds, resources and support needed to get the job done. Together, the two have become the face of the drive for commercial space travel.

Allen's belief in the project and those working on it is evident:

Every time SpaceShipOne flies, we demonstrate that relatively modest amounts of private funding can significantly increase the boundaries of commercial space technology. Burt Rutan and his team at Scaled Composites have accomplished amazing things by conducting the first mission of this kind without any government backing.

Rutan and his Scaled Composites team are building this space program from scratch. In just a few years and with fewer than 30 people, the Tier One program has turned out some of the most innovative designs in the industry.

Burt Rutan had this to say about the history and direction of Tier One:

Our concept design work began in 1996, and some preliminary development began in 1999. Our full development program began in secrecy in April 2001. This extensive experimental research effort is a complete manned space program. It consists of all new hardware including a launch aircraft [the White Knight], a three-place spaceship [the SpaceShipOne], a hybrid rocket propulsion system, a mobile propulsion test facility, a flight simulator, an inertial-nav flight director, a mobile mission control center, all spacecraft systems, a pilot training program and a complete flight test program. All our hardware components are full-scale, full space-capable performance, not mockups or interim vehicles.

For more information on SpaceShipOne and other spacecraft, check out the links below.

LLC was founded in 1982 by Burt Rutan. From its location at the Mojave airport in California, designs all sorts of experimental aircraft and space-launch vehicles. Tier One is just one of the programs underway at Scaled.