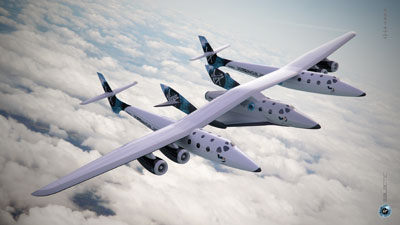 Editor's note: On Oct. 31, 2014, SpaceShipTwo was destroyed following an in-flight anomaly during a test flight.

For almost the entire history of human spaceflight, the privilege of leaving Earth's atmosphere to visit space has been limited to a very select few. Getting to space requires specialized education, extensive training and a lot of luck. It's always been a risky endeavor -- 18 people have died while participating in a spaceflight. Spaceflight isn't something the average person has had any chance to pursue.

One billionaire and one inventor are working to change that. Richard Branson, founder of the Virgin Group of companies, and Burt Rutan, world-renowned aircraft designer, are teaming up to create the world's first civilian passenger spaceliner. SpaceShipTwo will carry six paying customers and two pilots beyond the limits of the atmosphere, where they will experience weightlessness and the most spectacular view possible for several minutes before re-entering the atmosphere and gliding in for a landing.

Trips to space will be prohibitively expensive for several years, assuming SpaceShipTwo is successful, but it could pave the way for a whole new space industry. Virgin Galactic, the company that will offer the flights, will launch them from spaceports in the New Mexico desert. If the business model proves feasible, other companies could jump into the space tourism business within a decade.

What does it take to get into space? We'll check out the technology behind SpaceShipTwo, as well as the process required to get yourself on the passenger list. Then we'll find out what a ride to space will be like, and why 200 people have already paid thousands of dollars in deposits to be among the first passengers.

Five people (as of mid-2008) have paid for the chance to visit the International Space Station, making them the first space tourists. Each of them paid somewhere around $20 million for the privilege, riding up in a Russian Soyuz spacecraft. The space vacations lasted up to a week and were arranged by a company called Space Adventures, Ltd. The passengers all had to undergo medical testing and extensive training prior to the trips.