Hitching a Ride with WhiteKnightTwo 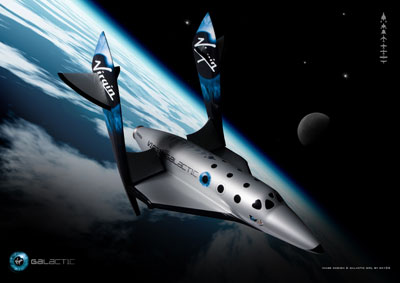 With the wings pivoted to the feathered position, SpaceShipTwo is aerodynamically stable and automatically positions itself properly for re-entry into the atmosphere.
Image courtesy Virgin Galactic

SpaceShipTwo is a descendant of the SpaceShipOne design. SpaceShipOne was the first privately designed and owned vehicle to fly into space and return. It did this twice within two weeks in 2004, fulfilling the winning criteria for the Ansari X-Prize, a $10 million contest intended to spur private spaceflight. It was designed by Scaled Composites, the company owned by Burt Rutan, and was funded by Paul Allen, one of the founders of Microsoft. (You can read all about the spacecraft in How SpaceShipOne Works.)

SpaceShipOne was flown to a high altitude while attached to a carrier plane, WhiteKnight. It then detached and fired its rocket, propelling it beyond Earth's atmosphere. After briefly climbing to an altitude of more than 62 miles (100 kilometers), the wings swiveled into a feathered position that allowed a safe and smooth re-entry into the atmosphere. The craft then glided down to land at an airport.

SpaceShipTwo will follow a similar flight pattern. It will be much larger than SpaceShipOne, however, with room for six passengers in addition to two pilots for redundancy (in case one pilot is incapacitated, the other can take over). The view will be visible through 17-inch (43-centimeter) windows. The carrier craft, WhiteKnightTwo, will be the largest all-carbon-composite aircraft in the world, with a wingspan of 140 feet (42.7 meters) [source: Space.com]. Powered by four Pratt and Whitney PW308A engines, WhiteKnightTwo will have two separate fuselages, with SpaceShipTwo suspended between them [source: Virgin Galactic]. Each White Knight Two fuselage will be identical to the interior of SpaceShipTwo, making it ideal for training.

Once WhiteKnightTwo carries the craft to 50,000 feet (15,240 meters), it will detach and fire its rocket. It will begin climbing immediately, shooting up for 90 seconds at more than three times the speed of sound. The apogee of the flight, or the point at which it's farthest from the Earth, is 110 kilometers (68.4 miles) above the surface of Earth. Once there, the wings will pivot into feathered position. At the relatively low speeds attained by SpaceShipTwo, re-entry into the atmosphere is pretty benign. Heavy heat shields aren't needed, and the design of the wings automatically slows and aligns the ship for proper re-entry by creating drag. The pilot is barely involved in that aspect. Once it drops down between 70,000 and 60,000 feet (21,336 and 18,288 meters), the wings are returned to their original position for the 30-minute glide back to Earth.

The entire flight will last two and a half hours. Passengers will spend four to five minutes in space (the international boundary between Earth's atmosphere and space is 110 kilometers, or 68.4 miles). Family members aboard WhiteKnightTwo will have the opportunity to watch the flight in person.

Next: how can you get a ride on this rocket?

Flying up to 50,000 feet (15,240 meters) attached to WhiteKnightTwo will be similar to any other plane ride, except for the incredible sense of anticipation. When the time comes, all passengers will be belted into their seats, which will fully recline. After dropping away from the carrier craft, a moment of silence precedes rocket ignition. The acceleration pushes the passengers back into their seats. When the craft nears apogee and the sky fades from blue to black, the rockets are turned off and the passengers can unbuckle and move about the cabin. At this point they will be weightless. After spending some time looking at Earth from the windows, they will get back into their seats for re-entry.