The Waiting List for Space: Space Tourism Requirements and Safety 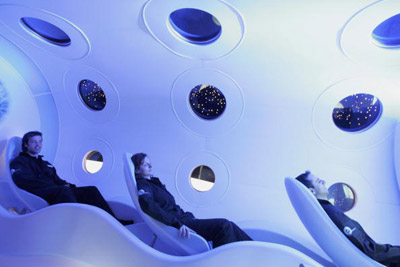 Virgin Galactic employees sit in the cabin of a prototype Virgin Galactic SpaceShipTwo spacecraft, destined to be the first-ever vehicle for space tourism.
Daniel Berehulak/Getty Images

Getting a ride on SpaceShipTwo isn't quite as simple as buying a boarding pass at the Virgin Galactic ticket counter. The first thing you'll need is a fair amount of money. For the foreseeable future, each flight aboard SpaceShipTwo will cost $200,000. That amount is expected to drop if space tourist flights become a regular, successful venture. The first 100 passengers paid the full price as a deposit, while others on the waiting list paid smaller deposits. These deposits amounted to $30 million in funding for the design of the spacecraft [source: Space.com]. Virgin Galactic claims to have more than 80,000 people signed onto a list of potential spaceflight customers.

When the design for SpaceShipTwo was unveiled in January 2008, it was 60 percent complete. A rigorous series of tests are scheduled to begin in the summer of 2008, and the company hopes to begin commercial flights in 2009. Even if Virgin builds several additional SpaceShipTwo spacecraft (they plan to build five of them in the first few years), those who are on the end of that list could face a wait of several more years before they get their chance to experience space.

Once someone's flight is scheduled, he or she must undergo a medical examination. Virgin Galactic reports that the health requirements won't be especially stringent (saying, "We are making every effort to make space travel as inclusive as possible"), but those with health issues that could put them at risk during flight won't be permitted on the flight [source: Virgin Galactic].

The training regimen for SpaceShipTwo's passengers is still being developed, but will likely include zero-g training and centrifuge training to simulate the g-forces of the rocket burn and re-entry. During the 90-second rocket burn into space, passengers will experience three to four times the force of gravity. During re-entry, they could endure up to six gs for a briefer period. Passengers will also train inside the cabins of WhiteKnightTwo, which duplicate SpaceShipTwo's interior exactly. Virgin hopes passengers will therefore be better able to enjoy their journey since they'll be in more familiar surroundings.

The current safety statistics of manned spacecraft, while admirable for cutting edge technology, aren't acceptable for commercial passenger service. SpaceShipTwo is being designed to reach the safety levels of early 1920s airlines [source: Space.com]. Traveling into space will probably never be routine or perfectly safe, but Virgin Galactic is trying to make it as safe as possible. For example, pressure suits will be available for each passenger in case of emergency. The leading edges of some wing surfaces are covered with ablative thermal protection material -- without it, Scaled Composites believes the craft would survive re-entry, but not without damage [source: Aerospace America Online].

We'll have all the available technical details about SpaceShipTwo in the next section.

On July 26, 2007, a propellant test conducted during development of SpaceShipTwo's rocket engines resulted in a deadly explosion [source: Space.com]. Three Scaled Composites workers were killed and three were hospitalized. The exact cause of the explosion remains unknown (the same test had been successfully conducted before), and it is unknown to what extent the incident might delay development of SpaceShipTwo.