By: the Editors of Publications International, Ltd.
The SPAD VII and SPAD XIII fighter airplanes were highly capable, powerful and popular during World War I.

The name SPAD is an acronym derived from the initials of the Societe pour Aaviation et ses Derives, a firm taken over by the famous Louis Bleriot from Armand Deperdussin. Bleriot had the good fortune to combine the services of his designer, Louis Bechereau, with the engine designs of Marc Birkigt, a Swiss engineer who designed the great line of Hispano-Suiza engines. Bechereau used the V-8, water-cooled Hispano-Suiza as the basis of his design for the SPAD VII airplane, which first flew during World War I in May 1916. 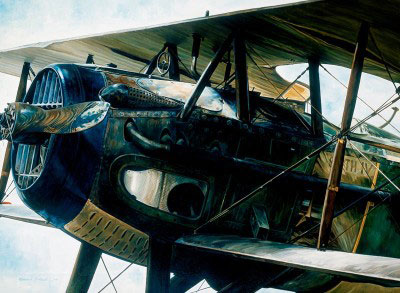 The SPAD VII classic airplane came to be the principal French fighter airplane able to oppose the new line of twin-gun, fixed-engine German Albatros fighters. The SPAD VII was a small, strongly built biplane, characteristics important to French pilots, who had suffered wing-failure problems with their Nieuports.

Built entirely of wood and fabric except for the necessary metal fittings and accessories, the SPAD VII was entirely conventional. Development of the Hispano-Suiza engine ultimately provided 180 horsepower, giving the SPAD VII a top speed of 118 miles per hour. It carried a synchronized Vickers .303 machine gun that fired through the propeller.

The SPAD VII became the fighter airplane of choice for most of the great French aces, including the beloved Georges Guynemer. Almost 7,000 SPAD VII airplanes were built.

A more powerfully geared, 220-horsepower Hispano-Suiza engine powered the SPAD XIII, which quickly became the preferred fighter airplane of both the French and U.S. Air Forces.

Strong and very fast at 135 mph, the SPAD XIII airplane carried two Vickers machine guns, but was not without its faults. It had "the gliding angle of a brick" without engine power, and the engines were notoriously unreliable.

The XIII airplane became the favorite mount of no less a person than the American Ace of Aces, Captain Eddie Rickenbacker, who scored many of his 26 (purists say 24.3) victories in "Old #1."

Both the SPAD VII and the SPAD XIII were highly capable and enjoyed success among World War I fighter pilots.