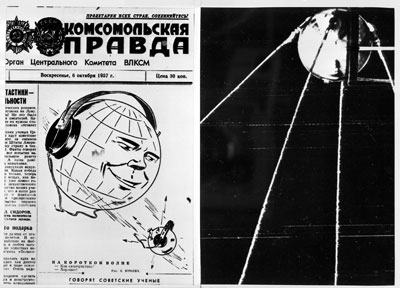 Russian media alerted the world about the successful launch of the Sputnik satellite.
AFP/Getty Images

On Oct. 4, 1957, the Soviet Union (U.S.S.R.) launched an aluminum ball less than 2 feet in diameter into orbit. This set into motion a series of events that changed our world forever. The simple device marked a new era of technological achievements. It also shook the confidence of the American people, who at the time were convinced their nation was the most scientifically advanced country in the world.

That device was Sputnik, the first artificial satellite. It wasn't much to look at, and it didn't have any advanced features or functions. But it did mark the first time humans put a manmade structure into orbit around the Earth. And it also proved that the Soviet Union, the Cold War enemy of the United States, had developed an intercontinental ballistic missile (ICBM) system. Such a system could deliver nuclear warheads to targets on the other side of the world from the USSR. It made America's former air superiority obsolete.

Because the satellite broadcasted a simple radio signal repeatedly, amateur radio enthusiasts around the world could listen to this small object emit beeps as it orbited the Earth. There was no denying the Soviet Union's achievement. The evidence was available to anyone with a ham radio.

Sputnik's launch was responsible for many things. The perceived missile gap spurred America's government to accelerate its offensive and defensive missile programs. It also kicked off the space race -- a competitive period in which the USSR and the United States tried to be the first to achieve important milestones in space exploration. It was even indirectly responsible for the creation of the Internet. That's pretty astounding for such a primitive device.

A team of engineers and scientists lead by the German rocket scientist Werner von Braun believed they could have launched the first satellite up to a year before Sputnik's debut. The United States government decided to invest in a competing team's design instead. Had the government supported von Braun's team, the space race might have been very different [source: Nova]. 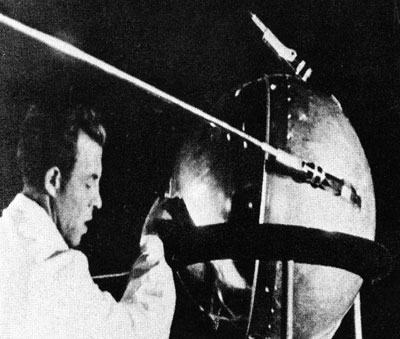 The history of Sputnik is tied to the history of the science of rocketry. Rocket science began to flourish between World War I and World War II. At the conclusion of World War I, Germany was forced to comply with the Treaty of Versailles, which among other things forbade Germany from building artillery. German military officials felt that rockets carrying explosives had the potential to replace artillery. The Treaty of Versailles didn't address rockets.

During World War II, rockets played a small part in Germany's plans. Hitler had hoped rocket attacks on cities would cause countries to panic and submit to Germany's demands. Although Germany did use rockets in several attacks, they didn't perform up to expectations. But the stage was set for further developments in rocketry.

In many ways, the rocketry programs in the Soviet Union and the United States were parallel. Both countries were eager to develop the most advanced rockets in the world. And both countries focused more on military applications of rocketry than anything else. In both the Soviet Union and the United States, the scientific applications for rocketry would have slipped through the cracks if it weren't for a few dedicated individuals.

In the Soviet Union, these individuals included Mikhail Klavdievich Tikhonravov and Sergei Pavlovich Korolev. Tikhonravov was a Soviet Air Force Academy graduate and expert in rocket science. He was responsible for many of the advances in multi-stage rockets in the Soviet Union. The multi-stage rocket made it possible for a rocket to reach orbit. Korolev was one of the founders of the Soviet space program. He was adept at leveraging political contacts to help fund the space program. He also understood the political importance of beating the United States into space.

­Tikhonravov and Korolev both led teams that helped develop the Sputnik program. Tikhonravov concentrated mainly on designing a multi-stage rocket that could reach Earth orbit. The concept was simple: as the first stage of the rocket reached peak speed, the rocket would jettison it and the second stage would fire. The rocket would build on its speed, going even faster. As the second stage peaked, the rocket would jettison it and the third stage would fire. Korolev was also instrumental in many design decisions. Some of those decisions were politically motivated. For example, in 1955, U.S. President Eisenhower announced that the United States would launch a satellite during the International Geophysical Year (IGY). The IGY spanned from July 1957 to December 1958. Shortly after Eisenhower's announcement, an official from the Soviet Union said that the U.S.S.R. would also launch a satellite during IGY. Korolev was under political pressure to beat the Americans into space.

While the Soviets had planned to launch a scientific research satellite into orbit, the design and production process was lengthy. In order to ensure that the Soviet Union launched its satellite first, Korolev decided to build a much simpler, smaller satellite. The result was Sputnik, a somewhat primitive device that still fulfilled the definition of a manmade satellite. 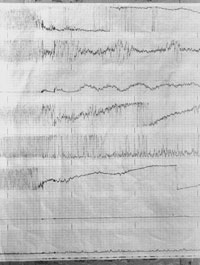 Korolev's team knew that in order to get a satellite up before the Americans, it would have to be small and uncomplicated. A heavier satellite would require further advances in rocketry to achieve the speeds necessary to attain orbit. The Soviets had to create a simpler device that didn't weigh as much.

Sputnik had a diameter of 22.8 inches (58 cm) and weighed 183.9 pounds (83.6 kg). Korolev's team built the orb out of two aluminum hemispheres, each only 2 millimeters thick. They attached two antennas to the satellite. They polished the surface of the satellite to make it easier to detect using optical telescopes.

Inside the satellite was a simple radio transmitter and a silver-zinc battery pack. The radio broadcast a repeated series of beeps. The purpose of this transmission was to provide proof to the rest of the world that the Soviet Union had succeeded in launching the first manmade satellite. Many radio operators wondered if the beeps had any further significance, and theories ranged from simple navigational readings to more sinister applications, such as spy information. In reality, the radio transmissions could only give listeners on Earth an indication of the temperature inside the satellite.

The satellite also had several other simple mechanisms inside of it. There was a fan that would turn on automatically if the temperature inside the satellite went above 86 degrees Fahrenheit (30 degrees Celsius). The engineers filled the satellite with nitrogen until it had an internal pressure of 1.3 atmospheres. They installed various switches that activated depending on changes in pressure or temperature. When activated, the switches altered the signals sent by Sputnik, giving Soviet ground control an idea of what was going on inside the satellite.

The engineers attached Sputnik to a special R-7 launch vehicle. Sputnik's systems activated upon detaching from the vehicle. The R-7 rocket had two stages and weighed more than 272 tons before launch (without fuel it weighed only 22 tons). It used kerosene T-1 as a fuel and liquid oxygen as an oxidizer. The Sputnik satellite sat at the top of the rocket, housed in a special casing that the rocket jettisoned upon attaining orbit.

The rocket was a stripped down version of a military ICBM. It had no remote control system, and operated solely using calibrated gyroscopes. The gyroscopes helped the rocket make adjustments in flight to maintain its course. There was no way for ground control to affect the rocket's flight path. In fact, there were no active tracking systems onboard the rocket -- the Soviet Union had to track Sputnik's progress by radar and ground telescopes.

In 1687, Sir Isaac Newton theorized that speed was the most crucial factor to obtain orbit. He illustrated the concept with a thought experiment: Imagine a cannon on top of a tall mountain. You aim the cannon toward the horizon. When you fire the cannon, gravity pulls the cannonball downward until it makes contact with the ground. If you use more gunpowder, the cannonball travels faster and goes further. With enough gunpowder, you could fire the cannonball so fast that it would match the rate that the Earth curves downward. The cannonball would fall perpetually, following the curve of the Earth until air resistance slowed it down. In an environment without air resistance, it would fall forever, circling the Earth. 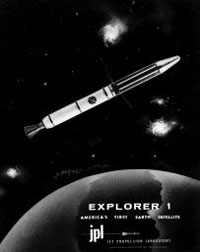 The Explorer I satellite was the first satellite successfully launched by the United States.
Courtesy NASA

It's not an exaggeration to say that Sputnik's launch revolutionized the world. In particular, the United States felt pressure to step up research and development in industries ranging from rocketry to military development to computer science. While it's likely that the U.S. would have invested heavily in these fields given enough time, Sputnik put all of that on the fast track.

One reason the U.S. had to react quickly to the launch was to regain the confidence of its citizens. Since the beginning of the Cold War, the people of the U.S. were convinced that they lived in the most advanced nation on the planet. When the Soviets announced their successful launch of the world's first artificial satellite, Americans were stunned.

While the thought of lagging behind the Soviets in space exploration was troubling, another idea caused even more anxiety. If the U.S.S.R. had discovered a way to launch a satellite into space, they might also be able to fire a missile carrying a devastating warhead at the United States from across the globe. The superiority of the U.S. Air Force would no longer give the United States the upper hand in any future conflict.

U.S. President Dwight Eisenhower knew about Sputnik before its launch. He and the rest of the U.S. government underestimated the impact the satellite's launch would have on the American people. The first U.S. satellite project didn't help bolster American spirits either. The satellite was called Vanguard. It could collect scientific data and transmit information back to Earth, making it much more complex than Sputnik. Unfortunately, Vanguard's rocket vehicle suffered a major failure at launch and the satellite was destroyed. A few months later, Werner von Braun's team of engineers successfully launched Explorer I. The space race was on.

A launch failure results in the destruction of the Vanguard I satellite, which would have been the first U.S. satellite.
Courtesy NASA

In the late 1950s, computers were rare. There were only a few supercomputers located at various research institutions and universities. Eisenhower recognized the need to protect the information contained in various computing systems. If the Soviets were to fire a missile and hit a computing center, all that information would be lost. He appointed officials to look into a way to connect these supercomputers together into a network so that information was no longer centralized in little pockets across the nation. Eventually, this network of supercomputers evolved into what we call the Internet. In a way, a Soviet satellite is responsible for the Web page you're reading right now.

While Sputnik's success meant the United States fell behind the Soviet Union at the beginning of the space race, eventually the U.S. surpassed the U.S.S.R. The Soviets were successful in launching the first man and the first woman into orbit. But the U.S. was the only nation that succeeded in landing astronauts on the moon. While Sputnik marked the beginning of the space race, the Apollo 11 moon landing was the end of it.

What Happened to Sputnik

Sputnik wasn't meant to last a long time. Its battery pack had a life expectancy of only a few weeks. After a little more than three weeks in orbit, the satellite's batteries failed. The satellite continued to orbit the Earth 1,440 times over 92 days. On Jan. 4, 1958, Sputnik burned up upon reentering the Earth's atmosphere [source: Russian Space Web].