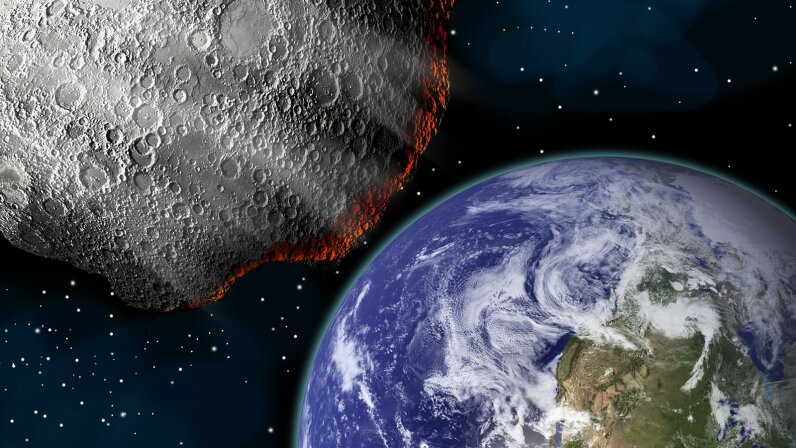 The day-to-day odds of an asteroid strike are minimal, but a single hit impact could spell extinction for the human race. Marc Ward/Stocktrek Images/Getty Images

Talk of "saving the world" is generally best left to comic book characters and prophets -- unless you happen to work for any of several international organizations tasked with identifying and tracking near-Earth objects (NEOs). Dubbed Spaceguard, this effort includes such organizations as NASA's Near Earth Object Program and Italy's Asiago - DLR Asteroid Survey.

These societies scan our solar system for objects destined to pass through Earth's orbit, especially asteroids 6.2 miles (10 kilometers) in diameter or larger. Should one of these "extinction class" NEOs collide with the planet, the effects would be catastrophic. Many scientists think such an asteroid impact caused mass extinction 65 million years ago, and the 1908 Tunguska Event serves as a stern reminder of the odds. While the more recent 20th century impact involved a much smaller NEO and occurred in the wilds of Siberia, a mere four hours of planetary rotation would have placed the bull's-eye on densely populated St. Petersburg.

Earth can't defy the odds forever, so the astronomers of the world watch the sky. Fortunately, should a significantly deadly Earth-bound asteroid present itself, we possess the technology to prevent the impact.

Scientists have proposed various mitigation techniques, ranging from the brutally simple to the overwhelmingly complex. All relevant tactics, however, center around deflection rather than destruction. Simply nuking an asteroid might merely scatter the debris -- turning a cosmic cannonball into cosmic buckshot. Worse yet, recent research indicates that an exploded asteroid would likely reform in two to 18 hours due to gravity [source: Shiga].

In response to a 2005 request from U.S. Congress, NASA presented asteroid mitigation plans at the 2007 Planetary Defense Conference in Washington, D.C. [source: NASA]. The agency determined that the best tactic would be to conduct a series of standoff nuclear explosions to push the NEO off course. Surface or subsurface explosions might also create the desired results, but run the risk of shattering the rock.

With an estimated global nuclear arsenal of 22,300 warheads, humanity certainly has the nuclear weaponry to carry out a standoff explosion [source: FAS]. As for moving them into position, the Near Earth Asteroid Rendezvous-Shoemaker probe successfully flew past an asteroid in 1997, orbited one in 2000 and became the first spacecraft to land on an asteroid in 2001 [source: NASA]. The key would be identifying the threat early enough to stage the mission.

A number of additional asteroid mitigation tactics may become more feasible in the future. Scientists believe that robotic landers could be used to deflect asteroids, either via mounted thrusters or solar flares. The flares would reflect solar radiation, gradually nudging the asteroid away in the process. One proposed technique even calls for the use of an enormous spacecraft as a "gravity tractor," using its own mass to tug the deadly NEO away from Earth.

Explore the links on the next page to learn more about how even a coat of white paint could help to save the world.

The Perseid Meteor Shower Is Back — Here's What You Need to Know
Orion Nebula Is Scene of Epic Star Battle
What if I looked straight at an eclipse of the sun?