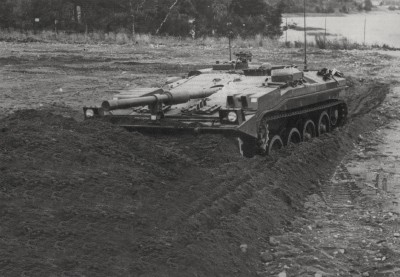 Stridsvagn -- battle car in Swedish -- 103 series tank is a highly capable Main Battle Tank (MBT) in a 43-ton package, The Strv 103, or S tank as it is also known, is the first practical turretless MBT to be developed. The low profile makes the Strv 103 very difficult to see when on the move and almost impossible to find when lying hull-down in ambush.

Design work began on the S tank in the mid-1950s, Sweden sought a tank suited to its particular landscape-a small country with rolling farmland in the south and high forests and tundra, which is frozen in the winter and soggy in the summer, in the north. A tank was needed that could operate across this kind of surface without bogging down. The tank also had to be able to meet the threat of both Warsaw Pact and NATO tanks.

The Swedish S tank design differs from earlier German and Soviet turretless armored vehicles in that its main gun is fixed in its mounting. This eliminates the need for the heavy mantlet and surrounding armor. It also makes possible the installation of a lightweight, reliable automatic loader and the elimination of one crew position. The S tank carries heavy frontal armor, the composition and thicknesses of which remain classified. During a 1984 upgrade program, add-on armor was applied to the Strv 103, particularly in this area.

Since the S tank must stop to fire, the driver can serve as loader and gunner. The driver/gunner sits on the left side, the commander on the right. Both have a complete set of driving and gunnery controls, and the commander can override the driver/gunner's controls at any time. Seated backward and slightly behind the driver is the radio operator, who also has a set of controls for driving the tank backward.

Learn more about this remarkable vehicle's equipment package on the next page. 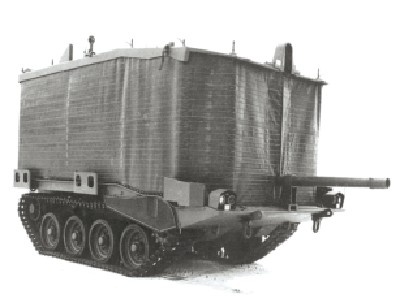 Designed for the varying Swedish terrain, the Stridsvagn 103 Main Battle Tank was equipped to deal with almost any contingency.