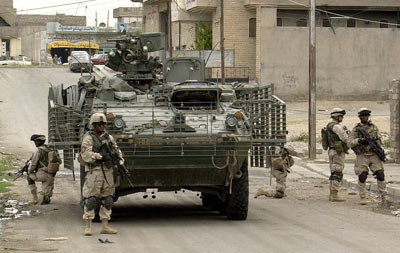 The Infantry Carrier Vehicle is built both for troop transport and as an offensive force in itself. In addition to the driver and commander, an ICV carries nine infantry soldiers. For weaponry, the ICV features a Konigsberg gun turret, which is operated via remote control from inside the vehicle. The gun turret can be equipped with a .50-caliber heavy machine gun, a 7.62-mm machine gun or a 40-mm Javelin missile launcher.

The Mobile Gun System delivers true tank-like firepower in a small and maneuverable package. In fact, the MGS is fitted with a 105-mm cannon, the same gun barrel found on the original M1 Abrams tank.

The cannon can fire four different types of ammunition:

In addition, the MGS has up to two secondary weapons, a 7.62-mm and a .50-caliber machine gun. To match all of this weaponry, the defensive system of the MGS is more robust than that of the ICV. Current plans for MGS armor call for special, reactive armor to go with the current steel structure and ceramic tiles. This Stryker also contains detectors for nuclear, biological and chemical weapons. By definition the heftiest of Stryker variants, the MGS presents the biggest challenge in meeting the weight requirements for rapid deployment by C-130 plane.

As you can see, the array of Strykers is designed to fulfill the needs of virtually every brigade in the Army.

In the next section, we'll examine the specific goals the Stryker project was instituted to address.

Mission: Vehicle for the New Army

To see what makes the Stryker so useful in the field, it is important to understand why it was developed. In the first half of the twentieth century, wars unfolded slowly and deliberately over vast areas of the globe. Transporting heavy equipment over long distances was a livable problem, because both sides were equally limited by how long it took them to move their armies. But in the current political and military climate, crises often erupt without warning and require a swift and powerful response.

Today's conflicts are often too short in duration and small in scale for the older strategies of moving large convoys of equipment slowly along supply lines. Further, today's opponents are often small but determined independent forces rather than large national armies. This puts pressure on the Army's ability to respond to threats all over the world in a timely and powerful fashion. In response to speed-of-deployment problems he faced in the Kosovo conflict in 1999, General Eric Shinseki drafted the "Army Transformational Plan," which called for sweeping changes in the Army's organizational structure to adapt to the new challenges it faced.

General Shinseki's plan ordered the development of a new set of combat brigades to be known as an "interim force." Each of these brigades would be self-sufficient, as powerful as a tank battalion, and able to be deployed by air anywhere in the world within 96 hours. This is no easy task considering that current heavy brigades must be moved by ship and often require weeks to deploy. An interim-force brigade or platoon of brigades would be used in one of two ways:

The Stryker project, a light vehicle designed to maximize speed, firepower, adaptability and interoperability, is the platform that was chosen to enable these new brigades to meet their objectives. If the interim-force brigades are as successful in the field as is hoped, Shinseki's plan then calls for the eventual transformation of the entire Army into an "objective force" where every brigade is capable of meeting similar goals of maximized firepower in a highly portable package.

In order to meet that last requirement, an interim-force brigade's Stryker vehicle must be transportable on a C-130 aircraft, since that is the U.S. Air Force's most common cargo aircraft. The C-130 weight restrictions require a cargo load of no greater than 22 tons, so a Stryker vehicle itself can't weigh more than about 19 tons. Throughout the process of testing and modifying the Stryker for the unique characteristics of live combat missions, meeting this weight requirement has been one of the project's toughest challenges.

If the interim-force brigades and their Strykers meet with success on the battlefield, one day we may see the end of the distinction between light and heavy brigades, and a vast sea of Strykers will head into battle.

For more information on the Stryker project and other military vehicles, check out the links below.