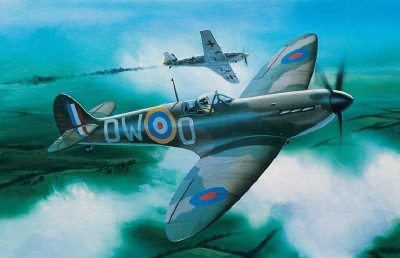 If the German Stuka was ugly enough to become the villain of air warfare, Britain's Supermarine Spitfire was handsome enough to become the hero. The beautiful little eight-gun Supermarine Spitfire would never have come into existence if the Supermarine Company had not been willing to invest its own money in a private-venture project that it knew was needed by the Royal Air Force, but for which there was no official requirement.

Nor would it have flown had it not been for the genius of Reginald J. Mitchell. Mitchell had designed the swift Supermarine racers that had captured the Schneider Trophy for England. Although terminally ill, he poured out his soul in the design of the Spitfire, continuing to improve it until his death at the age of 42 on June 11, 1937.

The prototype Supermarine Spitfire, K5054, was piloted by "Mutt" Summers on its first flight, on March 6 (not the fifth, as often reported), 1936. The radical nature of the Spitfire's design is difficult to appreciate now, when we are long accustomed to low-wing cantilever, all-metal monoplanes with an enclosed cockpit and retractable landing gear. But when the Spitfire first flashed across the field at Eastleigh, the Royal Air Force still operated fixed-gear biplane fighters, including the Gloster Gauntlet and Hawker Fury.

A novel two-place Supermarine Spitfire.
none

The basic aircraft of the Supermarine Spitfire was continuously improved throughout the war, with some 22,000 Spitfires coming off assembly lines in more than 40 models. The Spitfire fought successfully in every theater and was loved by its pilots and feared by its opponents for its speed and maneuverability.

The Supermarine Spitfire and the Hawker Hurricane were incredible aeronautical advances that, together with radar, would win the Battle of Britain in 1940, and the gratitude of the free world.