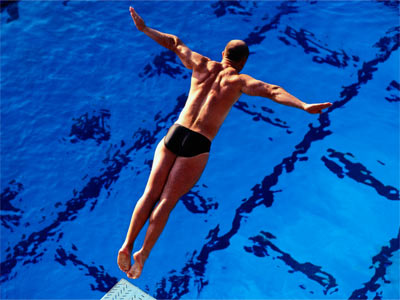 If Annette Kellerman hadn't changed bikini lines forever, we might not have modern briefs like these. Thanks, Annette!
Scott Thomas/­Getty Images

­If today's female Olympic swimmers were still weight­ed down by the swimming costumes of the 1890s, women would be "racing" in no less than stockings, bloomers and a short-sleeved dress.

It took movie star and athlete Annette Kellerman boldly sashaying onto a beach in a one-piece in 1907 to make an important cut to swimsuits. Without her, women might still be sinking like stones in the water. At the very least, they wouldn't be breaking world records at the current rate. K­­ellerman was arrested for her troubles.

­Fast forward to the 1970s, when male swimm­ers wore spandex briefs the size of dinner napkins, following the idea that less material brought about faster times. Now, swimsuits are again approaching full-body coverage, this time trying to resurface the swimmer's body to be better than -- well -- the swimmer's body.

­Th­ese days, honest swimmers aren't trying to gain a lap­ on competitors, but to win by hundredths of a second. For Michael Phelps and Milorad Cavic at the Beijing Olympics, that's what it came down to in the 100-meter butterfly. Phelps beat Cavic by 0.01 seconds.

Manufacturers are changing materials and fits, as well as collaborating more closely with scientists who know fluid dynamics, to try to supply that precious hundredth of a second. Suits, now sounding like airplanes, are welded, computer-modeled and tested in wind tunnels. But when the finishes are so close, it's hard to say what brings about the difference: suit, skill, psychology or chance.