Water Working Against You 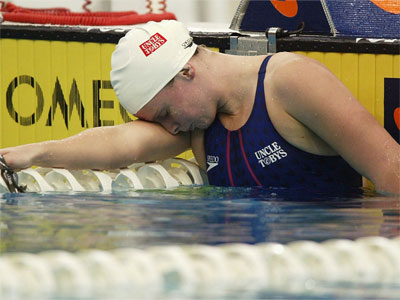 Victorious Australian swimmer Leisel Jones take a moment to get her breath after feeling the effects of the water's drag following a 2003 race.
Adam Pretty/­Getty Images

­If you've ever tried to race across the pool and found yourself panting, you know it's hard to swim fast. What makes it so hard? Water, with its invisible fluid forces, slows you down, says Stephen Wilkinson, a fluid mechanics engineer at NASA. So many fluid forces push against your motion that they're collectively called drag.

The strongest force pushing you backward is pressure drag (or form drag). As you push on the water, the water pushes back. If you're not a swimmer, you can get a sense of pressure drag by sticking your hand out of a car's window, with your palm vertical to the wind. The wind will push your palm backward.

More drag acts on you if you swim at the surface, as opposed to underwater. You displace some water, which travels as a wave in front of you. "While you are constantly trying to get in front of the wave, because of the physics of the problem, you never will -- you can't go fast enough," says Wilkinson. The wall of water, called wave drag, adds to the pressure pushing you backward. The lower you float, the higher the wall, and the worse your wave drag.

A weaker, but weirder, force is viscous drag (also called friction drag or skin friction drag). As you swim, a sheet of water sticks to your body and moves with you. Farther away, the water is still. The still water pulls on the water attached to you, slowing you down. What's worse, as you rip yourself and your sheet of water away from the still water, you create eddies. The eddies travel in a few-centimeter halo around your body, called the boundary layer. Those eddies slow you down even more. Viscous drag worsens with the amount of surface area you have in contact with the water and with how well water sticks to you.

If your surface is rough, a type of viscous drag Wilkinson calls roughness drag also slows you down. It's hard to run your fingers through a shaggy carpet, hard for wind to blow between trees and also hard for water to flow between your body hairs. The water snags on you and slows your swimming.

­It­ seems like a losing battle. Each time you swim a little faster, your drag increases. How, then, do fast swimmers do it?