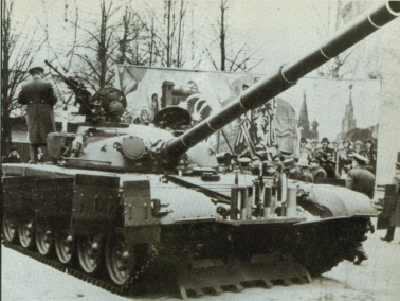 The T-72 Main Battle Tank (MBT) is thought to have entered production at State Factory Number 183 -- the Nizhni-Tagil Railroad Enterprise -- in 1972. Hints and rumors of its existence circulated until it was observed at close hand by the French Minister of Defense in 1977.

At first it was thought to be a variation of the T-64, but it is now known to have been a comprehensive redesign.

The T-72 is quite heavily armored. Protection ranges from 11 inches on the turret face to 8.8 inches of spaced, laminate armor on the hull nose, which is inclined so as to provide the equivalent of 21.5 inches of armor.

The T-72 is fitted with rectangular side armor plates that cover the vulnerable hydraulic shock absorbers at a 60º angle. When the plates are unclipped, they spring out to the 60º inclination. The tank also has a protective, full-length skirt.

A bulldozer blade is mounted on the T-72's nose and can be deployed to dig firing positions or clear debris. An infrared searchlight is mounted on the right side of the main gun, just the opposite of the T-64.

The T-72 Main Battle Tank carries a snorkel clipped to the left side of the turret. The T-72 uses the torsion bar suspension system, which is usual for Soviet MBTs.

Western intelligence sources consider it superior to the hydraulic-mechanical system used on the T-64. The T-72 has six road wheels per side that are quite a bit bigger than those used on the T-64. Three return rollers are used to guide the track on its return. Like the T-64, the T-72 is driven through the rear sprocket.

The main gun is the same 125mm smoothbore Model 2A46 that is used on the T-64. It is fed from an automatic carousel loader mounted on the hull floor.

The usual mix, based on captured Syrian T-72s, is thought to be 12 APFSDS, 21 HE-FRAG, and six HEAT-FS per carousel. The ammunition in the carousel is contained on two levels, powder charge below, projectile above.

As with the T-64, the main gun is stabilized, allowing the T-72 to shoot while moving on the road or cross-country.

The T-72 has full nuclear-biological-chemical protection. The interior of the tank is also lined with a lead-impregnated material for projection against radiation and neutron pulses.

During the 1982 invasion of Lebanon, the Israeli Army, using the Merkava's 105mm main gun and TOW antitank missiles, was able to destroy a large number of T-72s operated by Syrian armored forces.

After that, the Soviets conducted an extensive upgrade program in order to improve the tank's armor and survivability. Appliqué armor, fender skirts, and reaction armor boxes were all added.

The U.S. Department of Defense estimates that more than 17,000 T-72 tanks were built at four tank production facilities in the Soviet Union. Several variations of the T-72 are known, but the changes are minor. The only exception is the T-72 M1981/3, which is called the T-80 in the West.

The T-72 has been distributed to 15 nations in Eastern Europe, the Middle East, and Africa. It was manufactured in Czechoslovakia, India, Poland, and Yugoslavia. The T-72 was the numerical mainstay of Soviet MBT forces in Eastern Europe before the fall of the Soviet Union.

See the next page to find specifications for the T-72 Main Battle Tank. 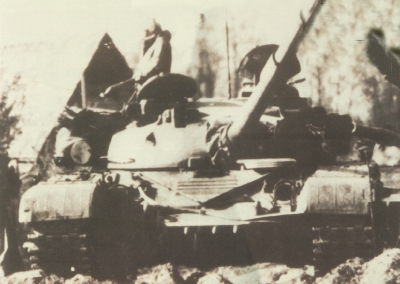 The T-72 Main Battle Tank was a more sophisticated version of the earlier T-64. It was powered by a 12-cylinder engine capable of burning a variety of fuels.
©2007 Publications International, Ltd.