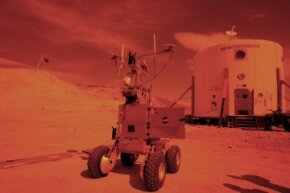 Snapshot of the Mars Society Desert Research Station in Hanksville, Utah, photographed, of course, with an orange filter.
© David Howells/Corbis

One day, like the 30 or so before it, Benjamin Driscoll sowed a bunch of different tree seeds as he trudged across the barren Martian landscape. As Driscoll drifted off to sleep, the rains came. When he awoke, the surface of Mars was covered in trees: "And not little trees, no, not saplings, not little tender shoots, but great trees, huge trees, trees as tall as ten men ..."

In the mind of sci-fi author Ray Bradbury, who created Driscoll for the short story "December 2001: The Green Morning," a story that became part of "The Martian Chronicles," terraforming was relatively easy. Sprinkle a few seeds here, a few seeds there, and before you know it, the rains come and a biosphere explodes in green rapture.

In the real universe, the process of making a hostile and alien environment into one suitable for human life is much more complicated. Still, that hasn't stopped scientists from researching different ways — some really out of this world — to create Earth-like environments on other planets, asteroids and moons.

The reason is simple: If we humans are to shake off our earthly shackles to explore the vastness of the universe, we'll have to find ways of creating ports of call from one end of infinity to the other. One way to do this is to tinker with an alien-world's environment and make it livable for human space travelers. It's a process called terraforming. As you read these words, scientists are trying to figure out mechanisms to create sources of oxygen, water and plant life in order to engineer a suitable human habitat on such foreign worlds. They're engaged in this effort because, after all, Earth won't be around forever [sources: NASA].

Terraforming Made Easy, Courtesy of Cyanobacteria

Living and working on other planets has been a dream of humans since we started gazing up into the firmament. Many people have longed to create bases on the moon, as well as Mars and other planets. It's not such a far-fetched idea. While it's one thing to build bases on an alien world — heck, they do it all the time on "Star Trek" -- it's quite another to terraform an entire planet.

First, we must find a so-called biocompatible planet, which already has the necessary building blocks for life. That's pretty much what NASA has been trying to do for decades as various spacecraft, including a fleet of Martian rovers, look for water, carbon and oxygen on alien landscapes. The agency also has been keeping an eye out for promising exoplanets, courtesy of Kepler and the like.

To jump-start the terraforming process, we might have to seed the planet with bacteria and other organisms [source: University of Maryland]. And if we wanted really to speed things up, we could use cyanobacteria to produce oxygen. These little cafeterias can make their own lunches and dinners in extreme; they wouldn't have to rely on an alien world for food. These tiny critters helped to create an oxygen-rich environment on Earth beginning some 3.5 billion years ago. Just how long this would take on another planetary body is anyone's guess.

Once terraforming began, cyanobacteria would speed up the process as conditions approached that of Earth. Eventually the planet would get to the point where it was possible to plant vegetation on the surface, which also would hasten the production of life-sustaining oxygen. When the time was right, we could even build an interstellar Noah's ark and drop animals on to the surface [source: University of Maryland]. 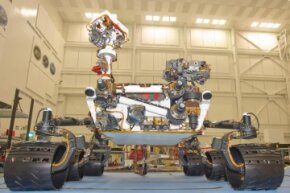 Rovers like Curiosity have helped us to do a little reconnaissance on Mars.
Image courtesy NASA/JPL-Caltech

Another way to create a habitable environment is to find a planet that can be terraformed rather "easily," using resources brought to the planet on an armada of ships [source: University of Maryland].

In our solar system, Mars has often been mentioned as the best possible candidate for terraforming. Some people estimate that it would cost about $2 to $3 trillion and take 100-200 years to make Mars' atmosphere dense enough, and the planet's temperature hot enough, to get water melting in the Martian poles and in the soil, thereby creating seas. Once that happened, an additional 200 to 600 years might pass before microbes and algae greened up the planet [source: Lilico].

One possible way to transform its desert-like landscape would be to pump the Martian atmosphere full of greenhouse gases. These gases, such as carbon dioxide, would trap heat from the sun, which would raise the planet's temperature, eventually allowing fauna and flora to thrive [source: NASA]. To do this, Earth would have to send solar-powered factories to Mars to pump the heat-trapping gases into the atmosphere. Once Mars heats up, its polar ice caps, which are composed of carbon dioxide, would begin to melt, warming the planet to a scorching 158 degrees F (70 C). It would be so hot that ice trapped on the planet would melt, providing water and oxygen (one of the molecules in water), the main ingredients for life as we know it.

Another way to heat up the red planet would be to direct gigantic mirrors to reflect the sun's radiation onto the polar ice caps. That would melt the carbon dioxide in the caps and start the greening process, too [source: NASA]. 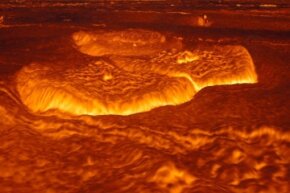 Given that computer reconstruction of Venus' surface, it's hard to believe the planet might one day be livable.
Image courtesy E. De Jong et al. (JPL), MIPL, Magellan Team, NASA

Yet, Mars might not be the best candidate for terraforming. A few scientists say Venus could be easier. For one thing, Venus and Earth have a lot in common. Each has a thick atmosphere, and both are nearly the same mass and size. Unlike Mars, the atmosphere on Venus would give scientists something to work with.

Venus boasts an atmosphere chiefly composed of carbon-dioxide. It covers the planet like an electric blanket, heating the surface to an average temperature of 872 F (467 C). Venus is so hot that most life, including human life, cannot possibly exist. Some organisms, however, do thrive in such harsh environments. They're called hyperthermophiles, and they can survive in temperatures above 176 F (80 C) [source: Griffith].

Some scientists believe if we seed Venus with these tiny, heat-loving creatures, at least the kind that chow down on sulfur, which is also present in the Venetian atmosphere, they would flourish on the inhospitable planet, converting all that carbon dioxide into oxygen, which other life-forms then can use to grow and thrive [source: Griffith].

Of course, there is no water on Venus, and water is essential for life. So what's a mad scientist to do? Slam a few comets into the planet, of course. Why should we do that? There's a dearth of hydrogen on Venus because it all escaped into space when the planet formed. Consequently, there's no water. But comets are dirty snowballs that contain ice. If we were to nudge a few comets toward Venus so bits of ice broke off and slammed onto the surface, water molecules would eventually form on the planet. The comets also would bring carbon dioxide, water, methane and ammonia [sources: Benford].

What About Terraforming the Moon? 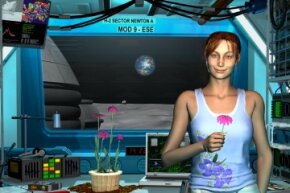 Building a small, enclosed settlement on the moon is a far likelier possibility than terraforming the entire satellite.
Stocktrek Images/Getty Images

The same process with comets could work for the moon, too. In fact, the moon might be the best place to terraform, seeing as it's so close. We'd have to find some way of steering about 100 comets the size of Halley's Comet toward our favorite satellite. Before the comets struck it, we'd have to find a way of blowing them up [sources: Benford; Cain].

Once we did, tiny ice shards would fly from the comets and scatter across the moon's surface, the beginnings of a rudimentary atmosphere. Eventually the comet strikes would force the moon to spin faster, and perhaps, just perhaps, nudge its axial tilt, which would create the seasons we enjoy on Earth. Scientists would then sprinkle algae and other organisms on the lunar surface, which would help to create oxygen. After a billion years or so, the Sea of Tranquility would really be a sea [sources: Benford; Cain].

Let's say we actually have the ability to terraform the moon or some other planetary body. Should we? Should humans tamper with alien environments? Should we just protect them? Some might argue for terraforming. It's in our best interest. Earth isn't going to last forever, and we might need another place to live. Others might say hold on to your molecules. Humans would just mess up a terraformed world, leaving it in worse shape than before [sources: Astrobiology Magazine, Philosophy Now].

Easy answers are elusive. So perhaps we should turn again to Ray Bradbury. He obviously thought about the implications of terraforming when he gave Driscoll a bag of seeds. At the end of the "Martian Chronicles," Earth has turned into a burned-out cinder because of a nuclear war, and a family is walking on Mars.

"I've always wanted to see a Martian," said Michael. "Where are they, Dad? You promised."

The father points into a canal.

"The Martians were there -- in the canal—reflected in the water. Timothy and Michael and Robert and Mom and Dad.

"The Martians stared back up at them for a long, long silent time ... "

Terraforming is still the stuff of science fiction, and while it is exciting work, we probably need to solve our own environmental problems here on Earth. And before we proceed and play God with another world, we need to think long and hard about its implications. In their zealousness to solve a perceived problem, researchers often lose sight of a basic question of their profession: To what end? 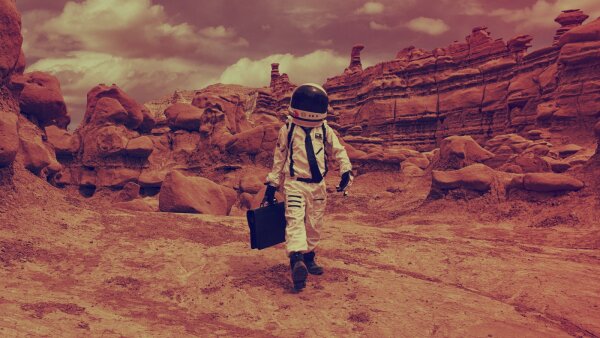 Up Next
How Terraforming Mars Will Work
Explore More 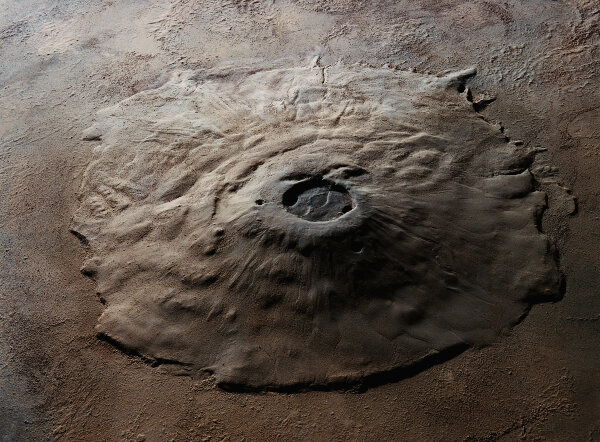 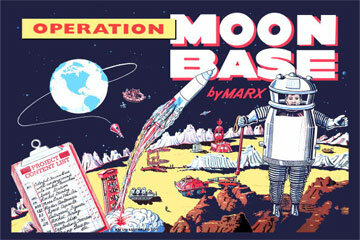 Keep Reading
Can someone own the moon?
Explore More