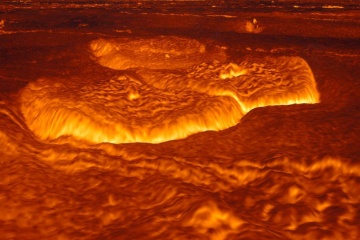 Given that computer reconstruction of Venus' surface, it's hard to believe the planet might one day be livable.
Image courtesy E. De Jong et al. (JPL), MIPL, Magellan Team, NASA

Yet, Mars might not be the best candidate for terraforming. A few scientists say Venus could be easier. For one thing, Venus and Earth have a lot in common. Each has a thick atmosphere, and both are nearly the same mass and size. Unlike Mars, the atmosphere on Venus would give scientists something to work with.

Venus boasts an atmosphere chiefly composed of carbon-dioxide. It covers the planet like an electric blanket, heating the surface to an average temperature of 872 F (467 C). Venus is so hot that most life, including human life, cannot possibly exist. Some organisms, however, do thrive in such harsh environments. They're called hyperthermophiles, and they can survive in temperatures above 176 F (80 C) [source: Griffith].

Some scientists believe if we seed Venus with these tiny, heat-loving creatures, at least the kind that chow down on sulfur, which is also present in the Venetian atmosphere, they would flourish on the inhospitable planet, converting all that carbon dioxide into oxygen, which other life-forms then can use to grow and thrive [source: Griffith].

Of course, there is no water on Venus, and water is essential for life. So what's a mad scientist to do? Slam a few comets into the planet, of course. Why should we do that? There's a dearth of hydrogen on Venus because it all escaped into space when the planet formed. Consequently, there's no water. But comets are dirty snowballs that contain ice. If we were to nudge a few comets toward Venus so bits of ice broke off and slammed onto the surface, water molecules would eventually form on the planet. The comets also would bring carbon dioxide, water, methane and ammonia [sources: Benford].