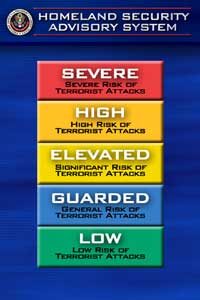 The U.S. Homeland Security Advisory System tells civilians, businesses and government authorities how prepared they should be for a terrorist attack.
AP Photo/Joe Marquette

­Unless you've been living under a rock since the terrorist attacks of Sept. 11, you've probably heard of terror alerts. In fact, if said rock happens to be, say, a mountain on the Afghanistan/Pakistan border, you may even be more familiar with terror alerts than the average civilian is.

In the wake of the attacks, international terrorism has become a major factor in global and domestic politics. Terrorist groups continue to plot destruction, and governments keep refining their methods of foiling such efforts. The Homeland Security Advisory System created by U.S. President George W. Bush in response to the Sept. 11 attacks marks one of those efforts. The goal was to create a national framework for the existing U.S. alert systems at the federal, state and local levels and tie them in with a warning system for businesses and civilians. By providing the public with a color-coded warning level, ranging from green for "low" to red for "severe," the U.S. Department of Homeland Security (DHS) aims to convey the "appropriate level of vigilance, preparedness and readiness."

­As a result, the national threat level in the United States has largely remained at the yellow "elevated" and orange "high" levels. As of January 2009, the alert level had changed 16 times ­since its inception. The threat level for international flights briefly rose to red in 2006, when a terrorist plot was uncovered to destroy multiple aircraft flying between the United Kingdom and the United States. This industrywide alert was subsequently lowered back to a permanent orange for all domestic and international flights. The national terror alert level eventually dropped to yellow.

But who decides what the terror alert level is and why? Read the next page to find out. 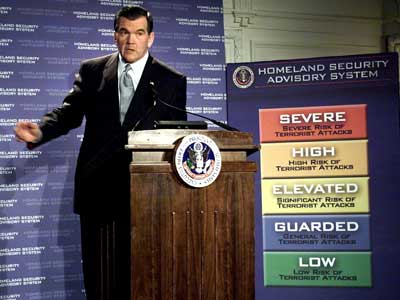 Explore the links on the next page to learn even more about terrorism and public safety.