Browse the article This Galaxy Doesn't Have Dark Matter, and That's Weird 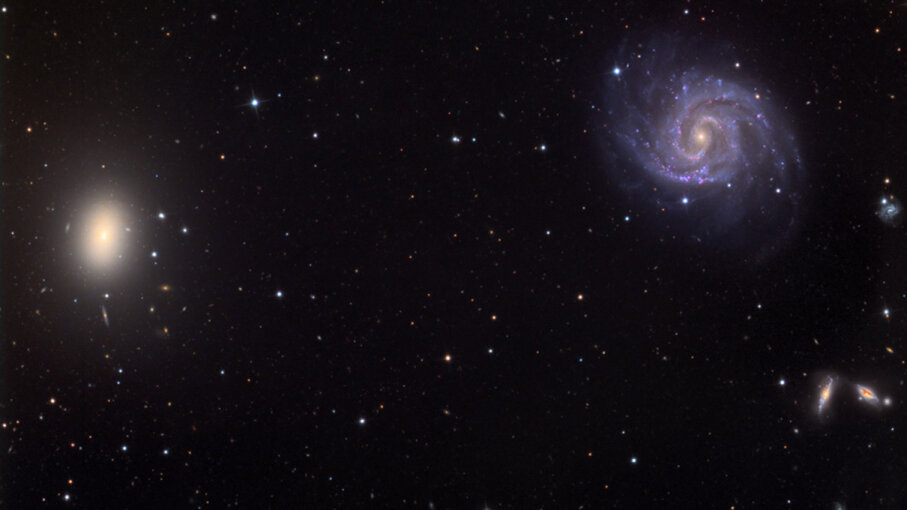 This picture shows NGC1052 (on left), a massive elliptical galaxy that dominates the neighborhood where NGC1052-DF2 also lives. NGC1052-DF2 is an ultra-diffuse galaxy located 65 million light-years away that seems to be missing its dark matter. Also pictured are NGC1042 (the main spiral) and NGC1048 (the two interacting galaxies on the bottom right). Adam Block/Mount Lemmon SkyCenter/University of Arizona, CC BY-SA 3.0

Dark matter is the bedrock that all galaxies are anchored to. You can't get one without the other. Or so we thought until astronomers found a ghostly galaxy that doesn't appear to contain any dark matter. It's as if the universe is playing a trick on us by flipping the laws of physics on their head — dark matter should be there, but it isn't.

It's a "game changer" galaxy, astronomers are saying, and it's like nothing we've ever seen before.

We may not be able to spot dark matter, but astronomers can measure its gravitational effects acting on normal matter. For example, they can look at how fast stars cruise around a galaxy. When dark matter is present, that galaxy's gravity will be bulked up, causing its stars to move faster than if just normal matter were present.

But in the case of NGC1052-DF2, an ultra-diffuse galaxy located 65 million light-years away, astronomers have found that its stars are moving in exactly the way that would be predicted if only the total mass of all the visible stuff is considered. In other words, dark matter doesn't seem to be exerting its gravity on normal matter in that galaxy. And that's weird.

"Finding a galaxy without dark matter is unexpected because this invisible, mysterious substance is the most dominant aspect of any galaxy," Pieter van Dokkum, of Yale University, said in a statement. "For decades, we thought that galaxies start their lives as blobs of dark matter. After that everything else happens: gas falls into the dark matter halos, the gas turns into stars, they slowly build up, then you end up with galaxies like the Milky Way. NGC1052-DF2 challenges the standard ideas of how we think galaxies form."

Ultra-diffuse galaxies are oddities in their own right, having only been discovered in 2015 as they are very difficult to detect. However, it appears that this class of galaxy is common, but none are like NGC1052-DF2.

The galaxy was discovered using the Dragonfly Telephoto Array, a telescope in New Mexico that's custom-made to seek out these elusive targets. Then, using the twin 10-meter optical and infrared telescopes at the W. M. Keck Observatory on Mauna Kea in Hawaii, the astronomers singled out 10 bright globular clusters (large compact groups of stars orbiting the galaxy's core) and used spectral data to measure their motions. These clusters were found to be plodding along more slowly than expected, meaning there's far less mass in that galaxy than would be predicted. In fact, there's so little mass that the researchers have come to the astonishing conclusion that there's little, if any, dark matter there.

Follow-up observations were made by the Gemini North telescope, also on Mauna Kea, so the galaxy's structure could be studied. With Gemini's help, the researchers ruled out interactions with other galaxies as being the cause of its weird dark matter deficit.

"If there is any dark matter at all, it's very little," said van Dokkum in the press release. "The stars in the galaxy can account for all of the mass, and there doesn't seem to be any room for dark matter."

This finding seems to suggest that dark matter has "its own separate existence apart from other components of galaxies," he added. And this makes the very existence of NGC1052-DF2 a mystery. If it has no dark matter, how did it even evolve into a galaxy?

In their study published in the March 29 issue of Nature, van Dokkum's team speculates that some cataclysmic event in the galaxy may have cleared out all the dark matter and blasted away all the star-forming gases. Alternatively, the nearby massive elliptical galaxy NGC 1052 may have played a role in NGC1052-DF2's lack of dark matter billions of years ago when it was undergoing the early and violent stages of evolution.

Now, the researchers are poring over Hubble Space Telescope observations of similar galaxies to perhaps find more that lack dark matter. If they find more, then ultra-diffuse and faint galaxies might be the norm if dark matter isn't present. And that's a fascinating development in our understanding of how galaxies evolve.

"Every galaxy we knew about before has dark matter, and they all fall in familiar categories like spiral or elliptical galaxies," concluded van Dokkum. "But what would you get if there were no dark matter at all? Maybe this is what you would get."

Now That's Speedy
Wondering exactly how fast a star moves? The sun zips along at a modest 125 miles (201 kilometers) per second, or 450,000 miles (724,204 kilometers) per hour. That's nothing compared to the speed of hypervelocity stars, which can cover millions of miles per hour.