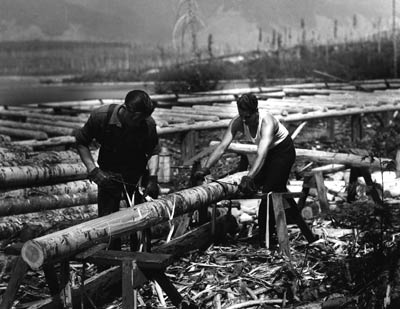 ­Euro­peans coming to North America in the 17th century discovered a new world covered in forest -- about 1 billion acres (405 million hectares), according to some estimates [source: Alvarez]. But building a nation required land, lumber and fuel. By the end of the Civil War, logging and agricultural operations had cleared 25 to 30 percent of the original forestland [source: Alvarez]. Some worried that the 20th century would bring a "national famine of wood" and called for stringent conservation efforts. These efforts, combined with a decreased need for farmland, began to stem the tide. By 1920, forest acreage stopped declining, and it has remained relatively s­table ever since [source: Doyle].

In the United States, government ownership proved to be an effective way to conserve forests. Governments at all levels -- national, state and regional -- can own forestland, although the federal government holds the largest amount. All of this government-owned land, nearly 323 million acres (131 million hectares), is known as "public" forestland [source: Alvarez].

The agencies responsible for managing this land include the Bureau of Land Management, the U.S. Department of Agriculture (USDA) Forest Service, the Fish and Wildlife Service, and the National Park Service [source: USDA Forest Service]. Management of federal lands is influenced by federal legislation. For example, in 2003, President George W. Bush signed the Healthy Forests Restoration Act (HFRA), which contains a variety of provisions to protect federal forestland that is at risk of wildfire or insect and disease epidemics.

Of course, much of the U.S. forestland lies beyond the reach of federal legislation such as the HFRA. Private interests own 57 percent, nearly 428 million acres (173 million hectares), of U.S. forestland [source: Alvarez]. Private owners include individuals, families, private cooperatives and forest products companies.

­Many forest companies participate in a program called the Sustainable Forestry Initiative (SFI), which provides a comprehensive system of principles, guidelines and performance standards that balance the perpetual growing and harvesting of trees with environmental protection and conservation. International Paper, the largest private owner of forestland, is a prime example. To adhere to SFI standards, International Paper regenerates every acre (0.4 hectare) harvested within two years by replanting, or within five years by natural reforestation [source: International Paper].

Other private owners are doing their part to protect forests as well. Many family forest owners are taking advantage of conservation easements. These easements restrict how a piece of property can be used, protecting the land against future real estate development, industrial use and many potential commercial uses. The right to enforce the restriction is given to a charitable organization or a government agency. These easements stay with the land, so even if it's sold, the restrictions remain.

­Through conservation efforts such as these, forests have been able to satisfy the increasing demand for lumber, paper and other wood products. But numerous threats remain. Find out what they are next.