On Monday, Aug. 21, people throughout North America — and in some parts of South America, Africa and Europe — will have a chance to observe a celestial phenomenon that's fascinated humans for thousands of years. A total solar eclipse, in which the moon moves between Earth and the sun, casting a shadow across our planet and briefly blocking out the sun's light.

A solar eclipse occurs when the moon passes between the Earth and the sun. Learn how the moon blocks the sun's light to Earth during an eclipse.

From most parts of North America, observers will be able to glimpse a partial eclipse, where the moon only covers a part of the sun. But along the path of totality — a band 70 miles (113 kilometers) wide that will move across the U.S. — people will be able to witness a total solar eclipse, in which the sun is completely blocked out by the moon for approximately two minutes.

Where Can I See the Eclipse?

According to NASA's Eclipse 101 website, the total eclipse will begin in Lincoln Beach, Oregon, at 9:05 a.m. Pacific time, and make its way across Oregon, Idaho, Wyoming, Montana, Nebraska, Iowa, Kansas, Missouri, Illinois, Kentucky, Tennessee, Georgia and North Carolina, before finally ending near Charleston, South Carolina, at 2:48 p.m. Eastern time. Lucky eclipse watchers in Carbondale, Illinois, will get the longest time in the totality, at two minutes and 40 seconds.

The last time a total solar eclipse crossed both the East and West Coast of the United States was in 1918, as this map from the American Ephemeris and Nautical Almanac for the Year 1918 shows. This is a scan from the copy of the almanac held by the NASA Goddard library.
NASA

If you want to see the total solar eclipse, you can pick the most convenient spot by consulting either NASA's downloadable map or interactive map of the path of totality, which shows how it will move across the country in 10-minute increments. GreatAmericanEclipse.com, an independent site set up specifically for this event, also offers a chart of 10 choice viewing spots across the nation. If you have to work or prefer to stay close to home, Google offers this simulator which will show you the time that either the partial or the total solar eclipse will occur in your area. And NASA is partnering with public libraries all across the country to host eclipse viewing events.

If you're planning to head to a viewing in the path of the totality, make sure to monitor weather conditions, and cross your fingers for a clear sky.

How Can I Safely Look at the Eclipse?

"The only time that the Sun can be viewed safely with the naked eye is during a total eclipse, when the Moon completely covers the disk of the Sun," says NASA. "It is never safe to look at a partial or annular eclipse, or the partial phases of a total solar eclipse, without the proper equipment and techniques. Even when 99 percent of the Sun's surface (the photosphere) is obscured during the partial phases of a solar eclipse, the remaining crescent Sun is still intense enough to cause a retinal burn, even though illumination levels are comparable to twilight."

A man uses protective glasses to view the moon passing in front of the sun, in Vigo, Spain, on March 20, 2015.
Miguel Riopa/AFP/Getty Images

So if you're not in the path of totality, do not look at the sun. If you are in the totality, before you look, be sure to protect your eyes. As the American Academy of Ophthalmology explains, looking directly at the sun, even for a short time, can damage your retinas permanently, and even cause a type of blindness called solar retinopathy.

The only safe way to look at the sun is through special solar filters (not to be confused with ordinary sunglasses) that are used in eclipse glasses or hand-held eclipse viewers that meet the ISO-12312 international safety standard. The American Astronomical Society provides this handy guide for telling whether your eclipse glasses are safe, which includes a list of certified manufacturers. Additionally, more than 2 million eclipse glasses will be available for free at public libraries throughout the country.

According to the American Astronomical Society, total solar eclipses cause a host of wonderfully bizarre phenomena. In the 15 minutes prior to totality, as more than half of the sun is covered, daylight becomes noticeably dimmer, takes on an odd tint, with shadows becoming sharper and more detailed. As the sunlight dims and darkness sets in, clouds on the horizon will go dark, as the lunar shadow sweeps over them. You may see undulating ripples of darkness and light called shadow bands appear on buildings.

In the 30 seconds before totality, viewers will get the first glimpse of the solar corona, the outer atmosphere of the sun, and strange sights such as Baily's beads and the diamond ring, as points of light remain on the edge of the moon. When totality starts, the chromosphere — the thin middle of the solar atmosphere — briefly becomes visible as a red arc. Then, the corona comes into better view, and careful viewers can observe details such as loops and arcs that indicate the sun's magnetic fields.

But a total solar eclipse can be truly mind-blowing, as you'll see from this video shot from a beach in Australia that was in the path of totality in November 2012.

But the total solar eclipse is more than an amazing sight. Williams College astronomy professor Jay M. Pasachoff, who chairs the International Astronomical Union's working group on solar eclipses, explained in an email that the event provides scientists with an opportunity to view an entire area of the solar atmosphere — the lower and middle corona — that isn't visible even to spacecraft.

Scientists have observations planned that will help to answer important questions about the corona. "We are studying how the corona changes over the 11-year sunspot cycle," says Pasachoff, "how the magnetic field around sunspots leads to the shapes of streamers and plumes we see in the corona, which of several possibilities of how the sun's magnetic field heats the corona to over a million degrees, and how fast eruptions that might hit the Earth come out of the sun."

In addition, says Pasachoff, scientists will study how the total solar eclipse affects Earth. "We will see how shutting off sunlight abruptly affects the temperature, density and humidity, and how it might generate waves in the atmosphere," he says.

A view of the total solar eclipse captured from Indonesia on March 9, 2016.
Bambang Prastowo/Pacific Press/LightRocket/Getty Images
Now That's Interesting
If you're really, really into solar eclipses and being able to watch one for a few minutes isn't enough, you can try to win a seat on an Alaska Airlines charter flight that will take off from Portland, Oregon, on the morning of Aug. 21 and chase the eclipse across the U.S. The contest begins on July 21 on the airline's social media channels.

So Long George Romero and Thanks for the Zombies 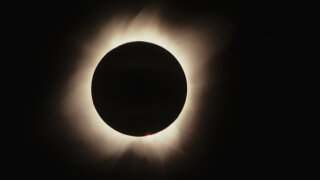 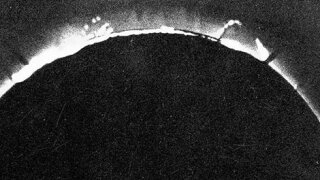 Photograph of a Total Solar Eclipse (1860)