Browse the article How Forklifts Work 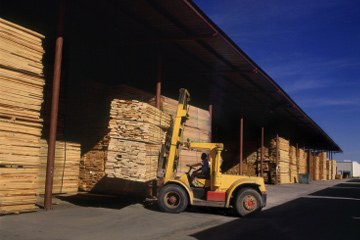 Forklifts can lift loads that are thousands of pounds, often several stories into the air, all without tipping over. See more truck pictures.
©iStockphoto.com/Arturo M. Enriquez

Most of us probably have a general idea of what a forklift is, but there are a number of different classifications, power sources, sizes, uses and new technologies that make up these useful machines. Some are used on rugged construction sites and lift heavy materials and equipment while other forklifts drive themselves inside modernized warehouses. Whether indoors or out, forklifts are a necessary tool in most warehouses and an integral part of our industries.

Forklifts might seem more industrial than inventive, but consider that they're typically the size of a small car yet they can lift loads that are thousands of pounds, often several stories into the air, all without tipping over. These machines work long hours each day lifting and moving heavy loads to keep our manufacturing, automotive, aerospace and other industries humming along.

Forklifts have been around for nearly 100 years and they continue to make our jobs more efficient just as much as they did when they were invented. Whether they're forklifts that use batteries, liquid propane, hydrogen fuel cells or another power source, without these machines we wouldn't be able to build, ship or move manufactured goods efficiently.

On the next few pages we'll learn how the forklift was invented, why it became popular, what the basic parts of a forklift are and what new technologies are changing forklifts for the better. If you've never been interested in forklifts before, you'll see that there's a lot more to these machines than you may have initially thought. 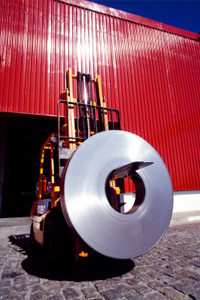 Forklifts can be outfitted with different attachments, such as for carrying barrels instead of lifting pallets, and each type of forklift class is designed for certain types of loads and specific working conditions.
©iStockphoto.com/josemoraes

Just like many other inventions, the forklift was born out of necessity. In 1917 the Clark Company, manufacturers of axles, created a truck called the Tructractor to move materials around their factory. As people visited the factory and saw the Tructractor at work they placed orders from Clark to build Tructractors for their companies. A few years later the first hydraulic powered lift was added to some trucks to give them lifting power. In 1923, Yale was the first company to use forks that lifted loads off the ground and an elevated mast that could extend beyond the height of the truck. The Yale truck is considered to be the first forklift [source: MHEDA Journal].

A few developments helped the forklift to increase in production including the introduction of the standardized pallet in 1930 and World War II. Both of these developments increased production of forklifts and allowed distributors the means to efficiently move heavy loads. As the use of forklifts increased so did the amount of hours they were being used. Shortly after forklifts became prevalent, they were designed with a rechargeable battery that could last 8 hours.

In the 1950s warehouses expanded upward instead of out so forklifts were designed to lift loads up to 50 feet (15.2 meters), which was higher than ever before. With the increased load height, certain safety measures to were applied to the forklift during this time including a cage for drivers to prevent them falling materials and a backrest to help keep the load in place as it's lifted. More safety measures were introduced in the 1980s including the operator safety restraint and developments in forklift balance technology.

On the next page, we'll talk about the basic elements that make up a forklift and how they all work together. 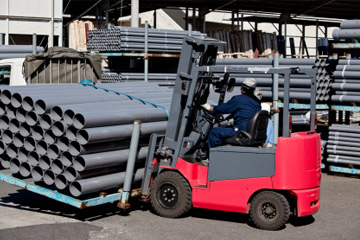 Forklift operators have to pass a test specific to the type of forklift they will be using before they're allowed to operate a forklift.
©iStockphoto.com/Niko Guido

Most of us have a good idea of what a forklift looks like but there are actually seven classifications of forklifts (aka industrial trucks). The classifications are set up by the Occupational Safety and Health Administration, or OSHA, and include the following typed of forklifts:

The classifications above give us some general distinctions between forklifts, such as different types of tires, power sources and even terrain. Forklifts can be fitted with pneumatic tires, which consist of a durable rubber that can go outdoors; these tires are similar to the tires on your car. Or solid tires (aka cushion tires), which are made of solid rubber tire that are typically used on forklifts that will be used indoors on hard and flat surfaces [source: Forkliftbiz.com].

Aside from the tires, there are some basic elements that make up most forklifts. They include:

Forklifts can be outfitted with different attachments, such as for carrying barrels instead of lifting pallets, and each type of forklift class is designed for certain types of loads and specific working conditions. Forklift operators have to pass a test specific to the type of forklift they will be using before they're allowed to operate a forklift.

One type or forklift that's found on construction sites is called the rough terrain forklift. These forklifts lift constructions equipment, roofing supplies, brick, lumber and other heavy supplies. These forklifts can lift a load the size of a pickup truck on top of a four-story building.

Up next, find out how forklift technology is evolving and how it impacts the way we move our heavy loads. 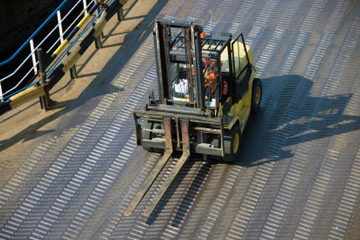 As the need for forklifts has changed, so has the technology behind how they work.
©iStockphoto.com/Bernhard Weber

Forklifts have had the same basic function over the years, move a heavy load from one place to another, but the technology to get the job done is constantly changing. The forklift industry has advanced in its power source technology, mobility and automation; allowing for even more versatility from an already versatile truck.

More environmentally friendly technologies are being incorporated into forklifts partly because of rising fuel costs, but also because some energy-efficient forklifts can last 20 to 30 percent longer than internal combustion engine forklifts. In 2010, orders for electric forklifts consisted of 63 percent of all orders and are not expected to drop below the 60 percent in coming years [source: MHEDA Blog].

The Yale Company has a battery-powered forklift with regenerative braking to send power back to the batteries when it slows down and can also recapture energy when lowering a load as well. Aside from battery-powered forklifts, clean-burning and alternative fuels like liquid propane, clean diesel and hydrogen fuel cells are used as power sources as well.

Aside from being more environmentally friendly, forklifts have also changed in their mobility with the introduction of the Sidewinder forklift. The Sidewinder is built by Vetex and can move in any direction. Instead of traditional pneumatic or solid tires the Sidewinder uses a series of rollers that are able to change direction. The Sidewinder forklift can roll over obstacles up to 3 inches (7.6 centimeters) high and move a 40-foot (12.2-meter) long beam through a narrow entrance while driving sideways, both of which would be difficult or impossible for traditional forklifts to do.

Another innovation in forklift technology is the automated forklift. These forklifts use guidance systems to maneuver themselves through a warehouse or building and pick up and drop off loads automatically. The automated forklifts are used in the aerospace, automotive, manufacturing, printing, newspaper and warehouse industries.

There are several types of guidance systems including the laser, inertial, wire and optical. The laser system uses retroreflective targets throughout a warehouse to bounce the laser beam off of and back to the forklift so it can determine its location. The inertial system uses magnets placed inside the floor in straight lines. The forklift has sensors to locate the magnets and stays on course wherever the magnets are located. The wire system uses an antenna to determine where the forklift is in relation to wires placed inside the warehouse floors and optical guidance systems use sensors to locate ultra violet strips painted on the floor.

As the need for forklifts has changed, so has the technology behind how they work. Head over to the next page to find out more information about forklifts and other related topics.