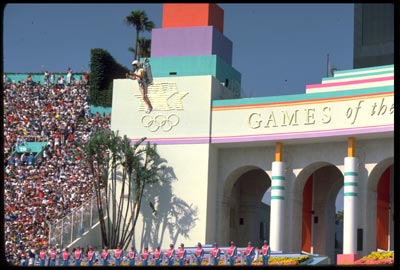 Rocket belts run on hydrogen peroxide fuel, which is not explosive on its own. This makes rocket belts slightly safer than jet packs. When the hydrogen peroxide is combined with pressurized liquid nitrogen and a silver catalyst, the chemical reaction generates superheated steam that shoots out of twin rocket nozzles at 1,300 degrees Fahrenheit (704.4 degrees Celsius). There's no flame, but it's still extremely dangerous. The result is 800 horsepower or about 300 pounds of thrust [source: CNN.com]. Hydrogen peroxide is a good, reliable fuel, and it's only by-product is water. However, it's very expensive, costing about $250 per gallon (3.78-liters). Each flight uses almost all of the fuel in the tank -- about seven gallons (26.5-liters) per flight.

The typical rocket belt weighs 125 pounds (56.7 kilograms) and the pilot has to weigh 175 pounds (79.4 kilograms) or less, or the rockets won't provide enough lift. The right hand controls the throttle, while the left hand controls yaw, which is side-to-side motion. Although rocket belts have short flight times, they can reach speeds up to 80 mph and they accelerate incredibly quickly. Landing is accomplished by gradually easing up on the throttle [source: Scientific American].

The opening ceremonies of the 1984 Olympics were held at Los Angeles Memorial Coliseum. In addition to music by John Williams and numerous dancers and performers, the ceremony included a rocket belt flight by Bill Suitor, one of the original Bell test pilots. He launched at one end of the stadium and flew quickly across the bowl to land in the center of the field. With almost 100,000 in attendance and a worldwide TV audience in the billions, it was likely the most widely witnessed rocket belt flight in history.