Does private transport have a future? 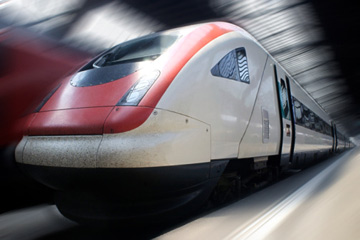 Will everyone be taking the train in the future?
Thinkstock Images/Comstock/Thinkstock

In Steven Spielberg's film adaptation of Philip K. Dick's story "The Minority Report," characters traveled across a futuristic Washington D.C. in cars that piloted themselves. The vehicles drew power from an electromagnetic grid that not only lined every street, but also extended up the sides of buildings. Characters could park their cars at their homes, even on the 30th floor of a high-rise apartment building. The infrastructure brought a new meaning to the phrase door-to-door travel.

The film was set in the year 2054. But while Spielberg consulted with engineers and futurists about what city-wide transportation systems might look like in the future, could it be that their vision wasn't dramatic enough? Is it possible that we'll abandon private transportation completely in favor of a public alternative?

Even assuming that a region is capable of creating a public transportation system that can meet the needs of its population, there's still the factor of personal freedom to take into account. Vehicle owners have the ability to travel on their own schedules. Moving to a system that eliminates private ownership is difficult to imagine. While it might be possible on a technological level, it'd be a difficult move politically. Consumers would likely resist such a change since it would decrease their personal liberties.

One potential compromise would look a lot like Spielberg's film. Commuters might use personal transport vehicles that operate on a public system. Rather than owning a vehicle, everyone would have access to cars or pods that could transport small groups of people -- like a family -- to specific destinations. But such a system would mean you wouldn't necessarily have access to the same vehicle on every trip. You couldn't leave belongings in the vehicle and there'd be no guarantee that the people using the vehicle before you would leave it in an acceptable condition.

It's likely that some regions will never abandon private vehicle ownership. People who live in remote or rural areas may need private vehicles to travel to towns and cities. Businesses and transportation companies will need to own vehicles to move goods from one location to another. In that sense, private ownership will likely be around forever too.

Unless the cost of private vehicle ownership becomes too high for the average commuter, private cars have a future. It would take the combination of many factors -- environmental concerns, increased taxes, decreased access to fuel and more -- to provide the foundation necessary to give it up altogether.

Learn more about the future of vehicles through the links on the following page.