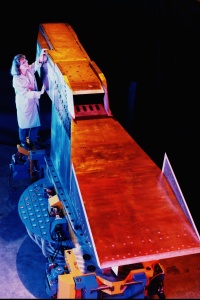 As anyone who's ever belly flopped off a high dive can tell you, when you hit a fluid without giving it time to get out of the way, it tends to hit back. Divers beat physics by taking a more streamlined plunge, and faster cars and aircraft do it by sporting more aerodynamic shapes. But there comes a point, near the sound barrier, where streamlining is not enough -- a speed at which the very air that keeps your plane aloft begins to hammer you with seemingly insurmountable drag, teeth-rattling turbulence and brutal shock waves. Indeed, many believed this sound barrier unbreakable until, on Oct. 14, 1947, Chuck Yeager's rocket-powered Bell X-1 proved them wrong.

But what if you could turn all that piled-up air to your advantage? What if, instead of churning through it with propellers or burning through it with rockets, you could pack it into a specially shaped tube, pump it up with an explosion and fire it out a nozzle at supersonic speeds, all with no major moving parts? You'd have a very special type of jet engine, a "flying stovepipe" fit for slicing through the sky at thousands of miles per hour. You'd have a ramjet.

But the ramjet's apparent simplicity is deceptive; it takes cutting-edge aeronautical engineering, modern materials and precision manufacturing to pull one off -- which partly explains why an idea nearly as old as powered flight was repeatedly taken up and cast aside for decades before achieving limited success during the Cold War.

Unlike its main speed competition, the rocket, which burns fuel using onboard oxidizers like ammonium nitrate, potassium chlorate or ammonium chlorate, ramjets breathe air. Thus, while rockets can operate in the near vacuum of space, ramjets must fly through the atmosphere. They must do so at very high speeds, too -- around Mach 2.5-3.0, or three times the speed of sound -- because ramjets work by harnessing ram pressure, the natural air compression brought on by an aircraft's high speed. In other words, ramjets make allies of the very shock waves and compression forces that once opposed high-speed flight; they literally go with the flow [sources: Encyclopaedia Britannica; NASA].

Ramjets are more efficient over long distances than rockets but suffer a significant disadvantage: They are useless at low velocities. Consequently, they rely on booster rockets or other vehicles to get them up to speed. Standalone ramjet aircraft typically use hybrid engines [source: NASA].

If that explanation flew past you at supersonic speed, it's probably because we skipped over a lot of cool and interesting stuff. Let's look at how jet engines have developed to produce this modern marvel. 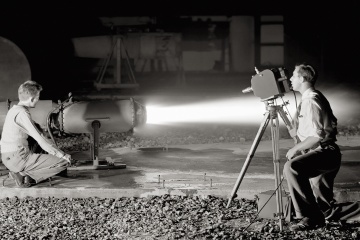 Ramjets, Ahead of Their Time?

Whoever said that you have to walk before you can run never met Frenchman René Lorin. He saw the possibilities of ram-pressure propulsion as early as 1913, when pilots were still flying glorified wooden kites. Aware of the design's uselessness at subsonic speeds, he instead designed a ramjet-assisted flying bomb. The French military waved him off. Hungarian engineer Albert Fono, another ramjet pioneer, pursued a similar idea in 1915 and received a comparable reception from the Austro-Hungarian Army [sources: Gyorgy; Heiser and Pratt; Wolko].

Ramjets designs enjoyed a short vogue between world wars. Soviet engineers made early strides in rocket-based ramjets (see next section), but interest burned out before 1940. The German occupation interrupted French engineer René Leduc's early work, but his persistence and secrecy paid off on April 21, 1949, when his Lorin-inspired 010 model made its first powered flight of a ramjet aircraft. Carried aloft atop a Languedoc 161 airliner, it flew for 12 minutes and reached 450 mph (724 kph) at half power [sources: Siddiqi; Ward; Wolko; Yust et al.].

Despite intriguing designs like the Hiller XHOE-1 Hornet helicopter, the proposed Republic XF-103 bomber interceptor and the short-lived Lockheed D-21B unmanned reconnaissance drone, ramjet aircraft languished until the 1964 debut of the Lockheed SR-71 Blackbird. The fastest manned aircraft until its retirement in 1989, the Mach 3+ Blackbird also used a hybrid engine, sometimes called a turboramjet [sources: National Museum of the USAF; Smithsonian; Ward].

We'll dive into the SR-71 and other ramjet hybrids and subtypes in the next section. 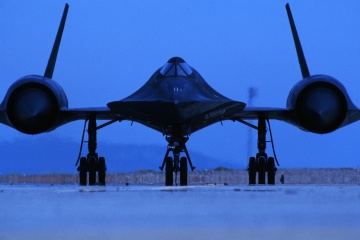 How Trains Work
Benevolent Drones: Is a Future Without Land Mines Just a Decade Away?
Clear Plastic Bubble Would Let Aircraft Passengers Enjoy View from Outside