What's the Segway recall about? 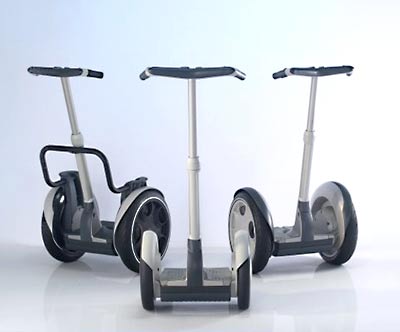 Segway Inc. announced on Thursday that it's recalling all of the scooters it has sold since the Segway Personal Transporter (once known as the Human Transporter) went on the market in 2002. This isn't the first Segway recall. The 2003 recall affected a smaller number of Segways and had to do with the battery. When the battery charge got too low, the scooter would abruptly stop. This seems like an obvious cause and effect, but people were getting hurt, so Segway added a software patch that enabled a smoother "low battery" response. The latest recall is related to a more complicated problem.

The voluntary recall of all Segways in September 2006 is related to a software glitch. The malfunction causes the wheels on the device to suddenly start moving backward when a number of factors align. The details right now are a bit spotty, but it appears that the problematic circumstances begin with the Segway's "speed limiter."

But this speed constraint is artificial -- a piece of software that Segway calls a speed limiter makes sure the scooter stays under that speed. When someone on a Segway leans too far forward, the scooter wants to go faster and faster. When it reaches 12.5 mph, the speed limiter tells the riding platform to tilt backward (the front of the platform rises up a bit), shifting the user out of the accelerating position. The problem occurs when the platform is tilted backward and the rider gets off the device and then quickly gets back on. It's unclear whether the wheels start moving forward and then suddenly reverse direction or they just immediately start moving backward, but either way, the rider ends up falling off very quickly, possibly after slamming into the front portion of the scooter.

The engineers designing Segway's latest model actually stumbled onto the problem in a round of testing. When they found it, Segway went back into its archived accident reports and found at least six incidents that may have been related to this glitch. In all cases, the users fell off the Segway and got hurt, mostly with minor head or wrist injuries, although one user broke some teeth when the scooter reversed direction.

The software upgrades to resolve the problem are free, and owners can bring their scooter to any Segway dealership in the world to get the fix loaded onto their machine, which takes less than 20 minutes.

For more information on Segways and related topics, check out the following links: