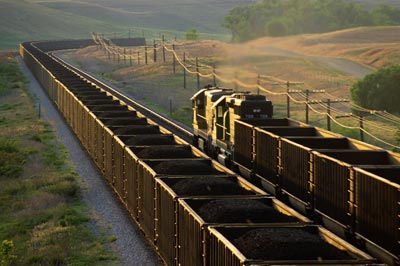 ­Railroads are perhaps the cheapest way to haul freight overland. According to the Association of American Railroads (AAR), the U.S. freight train system leads the world in volume of traffic, amount of freight hauled, revenues, affordability, miles of track and other measures.

Freight railroads carry lots of stuff, but the most common item is coal for electrical power plants (44 percent tonnage and 21 percent revenue). Chemicals, farm products, nonmetallic minerals, mixed shipments and other commodities make up the major categories. In 2007, Class I railroads hauled more than 1.9 billion tons (1.7 billion metric tons) of freight and earned about $53 billion. Freight railroads make money based on the weight of freight and the distance traveled. The industry uses the ton-mile as the basic unit, and Class I railroads carried more than 1.7 trillion ton-miles in 2007 [source: AAR].

The international leaders in freight railroads are the United States, Russia and China. In contrast to the United States, European railroads are mostly government-owned. They primarily transport passengers and, to a much lesser degree, freight. However, this setup is changing, and hauling freight is becoming increasingly important. European railways don't make as much money hauling freight as their U.S. counterparts do. Their situation seems to be similar to that of U.S. freight railroads before the Staggers Rail Act of 1980 was passed.

On the passenger front, however, European railroads are millions of meters ahead, as you'll read about next.

Before 1980, U.S. railroads were heavily regulated by the federal government, which set the fees that railroads could charge, among many other regulations. By the 1970s, the railroads were nearly bankrupt. Congress could either deregulate the railroads or nationalize them. Lawmakers opted for the former. The Staggers Rail Act of 1980 gave the railroads the freedom to determine the routes of transportation, set rates for moving freight and streamline procedures for sale of rail lines. The act did set maximum rates that railroads could charge and procedures to prevent abuses by railroad companies. Since the act was passed, railroads have become more competitive and have increased their revenues and volume of traffic significantly. It seems railroads can be a moneymaker.