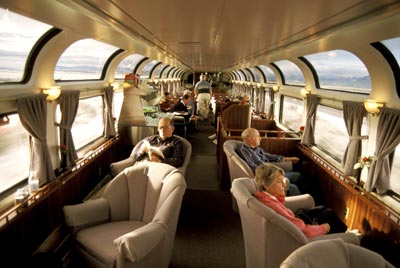 The lounge on Amtrak's Coast Starlight train looks pretty comfortable, so why aren't more people riding on the only nationwide passenger railroad in the United States?
Lee Foster/­Getty Images

Amtrak operates on tracks owned by host railroads. In fact, 70 percent of Amtrak routes are owned by Class I freight companies. It serves more than 500 destinations in 46 states. In 2007, Amtrak carried 25.8 million passengers (average of 70,000 passengers on 300 trains daily).

Amtrak receives federal, state and local support in return for offering passenger and commuter services. Despite the government support and increased ridership, Amtrak hasn't turned a profit. In 2007, Amtrak's expenses exceeded its revenues by about $1 billion. One potential reasons for the shortfall is the fact that Amtrak faces steep competition from automobiles and airlines, but more about that later.

­In contrast, European railway systems are devoted primarily to passenger traffic. Most European railways are government-owned. In 1959, the Eurail Group was created to handle the increased tourism load. The organization coordinates and markets passenger rail traffic among 30 European countries. The European network connects most European cities. Eurail's high-speed trains have become competitive with airlines and are more efficient than automobiles.

Russia, China, Korea, Japan and Australia also offer passenger rail service. Each country has an extensive rail network for passenger travel. Furthermore, the European train network is being linked to railways that travel to China, India and Southeast Asia. However, not all countries or continents have established international rail networks. Neither Africa nor Central or South America boast such networks. And while Mexico, Peru, Brazil, South Africa and Morocco have trains, those trains operate on tracks located solely within those countries.

We can't let this page end with mentioning a few of our favorite famous passenger trains.

Will train travel catch on in more than a few select countries? Keep reading to find out.

Planning to See the World by Rail?

Are you thinking about taking a train trip within the United States? You can learn about routes, schedules, and reservations online at Amtrak's home page. If you're bound for Europe, you may want to look up Eurail's passenger routes and schedules, as well as reservations, on the Eurail home page.