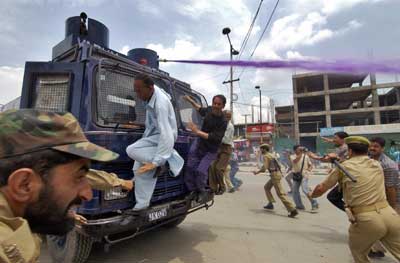 Indian police hose down demonstrators with dyed water cannons. The dye is difficult to wash off, making it easier for police to identify protesters fleeing the scene.
Tauseef Mustafa/AFP/Getty Images

Let's take a closer look at the three basic components of a water cannon: a water source, a pumping system and a deluge gun. The water source can be either a water tank that accompanies the two other components, or it can be an external source, such as a fire hydrant, swimming pool or natural body of water. Fire engines typically use both sources, allowing firefighters to begin using a tanked supply of water right away while other firefighters connect hoses to an external source. That way, there's no waiting around for water while a fire burns.

The mounted deluge gun allows the user to aim and shape the stream of water. When firefighters manually use a hose, they often have to struggle to keep it from whipping out of their control. After all, the water comes out under incredible pressure and naturally pushes the hose in the opposite direction. The deluge gun attaches firmly to the truck to prevent this, allowing one person to operate it -- sometimes even remotely.

Of course, it doesn't matter how nice the deluge gun is or how big the tank is if you don't have the necessary power. Most modern water cannons are kinetic pumps, meaning they depend on an impeller water pump to move and pressurize the water. Water enters the pump and hits the rotorlike impeller. The spinning impeller then slings the water outward, creating pressure by centrifugal force -- not unlike water in a high-speed washing machine. After the water has built up kinetic energy in the pump, it's routed out to the deluge gun. This allows for a constant, powerful stream of water.

Kinetic pumps entered the picture in the 20th century. Before that, most pumps were displacement pumps, which used plungers, pistons and gear pumps that work like enclosed water wheels.

Looking ahead, researchers in Russia are working on a way to use an electromagnetic pump to fire a stream of water. By placing a volume of liquid inside a magnetic field and then electrifying it, you can subject the fluid to the electromagnetic force, pushing it forward. Will this be the future of firefighting and crowd control? Only time will tell.

Explore the links below to learn more about firefighting and water-based technology.

Yes, some developers have busied themselves with creating anti-riot water cannons that deliver a jet of electrified fluid, stunning the person on the receiving end. The catch? Normal water isn't going to do the trick. If you're looking to transmit electricity through a stream of liquid, you'll want to use a fluid that's more conductive than normal water. Researchers have reported success with saline solutions.