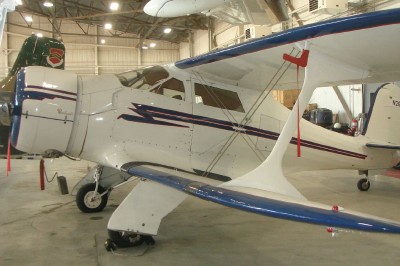 The reverse stagger of its wings, its clean fillets (aerodynamic joining of surfaces), and its (later) retractable landing gear made it unique. The Staggerwing would dominate the executive aircraft market until it was replaced, postwar, by the equally classic Beech Bonanza.

The Beech Staggerwing represented a tremendous gamble, for it was launched at the very depth of the Depression by Walter Herschel Beech, a rough-talking, hard-drinking Tennesseean who had carved his way to the top in one of the most competitive aircraft markets in the world -- Wichita, Kansas.

Wichita was home to E.M. Laird, Jake Moellendick, Lloyd Stearman, Clyde Cessna, and many other aviation pioneers. Beech had been the principal selling force behind the success of Travel Air aircraft, but that was not enough for him. He wanted to build a cabin biplane that would fly executives over a range of 1000 miles at speeds exceeding 200 miles per hour.

His creation was an instant success, and quickly dominated the marketplace. As the ultimate symbol of prestige, it was expensive -- $18,000 at a time when a Cadillac could be purchased for $2,500. It was also demanding to fly, but could transport passengers faster than any competitor, and that's what sells airplanes, then and now.

A total of 748 Beech Staggerwings were built, and not only are many still flying as cherished and immensely valuable classics, the Beech 17 has been paid the greatest compliment of all in the form of the Griffon Lionheart, a modern interpretation of the Staggerwing formula, executed with the latest in technology and materials. Walter Beech and his wife Olive, a supremely competent manager and administrator, would be proud of it.