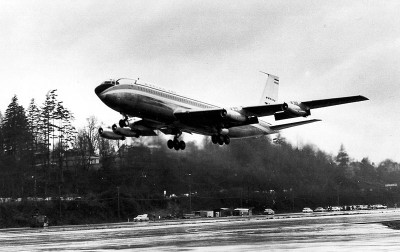 Some 20 years after its introduction, the Boeing 707 had become a long-range convertible transport that could carry passengers and significant cargo in single runs. The U.S. Air Force utilizes 707 variants as VIP transports. See more classic airplane pictures.
m

The medium-range Boeing 707 first flew on December 20, 1957. The plane was unique -- and important -- because it could manage a full passenger load without full fuel tanks at the outset of a flight.

After World War II, the Boeing Company had good engineers and good businessmen, and wanted to regain a position of prominence in the airline industry with the lessons it had learned with the B-47. It did so with the Boeing 367-80, the famous "Dash-80" prototype, which first flew on July 15, 1954. The Dash-80 served with distinction as a Boeing test aircraft for many years, pioneering new engines and flap systems that were adopted by later designs.

Its first great achievement for Boeing was winning a contract for more than 800 KC-135 tankers, which more than covered the commercial gamble Boeing had taken, and cleared the way for the production of an airliner.

The airlines were impressed with Boeing's 367-80 (and so was Boeing competitor Douglas Aircraft) and orders began to pour in for the Boeing 707, which featured a wide body with seating for 143 people. Top speed was a brisk 600 miles per hour.

As advanced as the Boeing 707 was, it was subject to almost continuous change, in part from the demands of airline customers for customized instrumentation, interiors, seating arrangements, and range requirements, and also from the competitive pressure of the Douglas DC-8 airliner.

Outwardly almost indistinguishable from the swept-wing, podded-jet engine arrangement of the Boeing 707, the DC-8 was able to draw on the tremendous loyalty of airlines to Douglas products. In the end, however, the Boeing Company would win out with a relentless series of new models -- 727, 737, 747 -- each in many variants, to the point that Douglas could no longer compete, and was ultimately forced to merge with McDonnell.

With the Boeing 707, Boeing created the right plane at the right time, a landmark in aviation history that opened the doors to international travel by masses of ordinary people. It gave the United States a lead in airliner manufacture that is only now being challenged.

Crew: 4, plus as many as 10 flight attendants