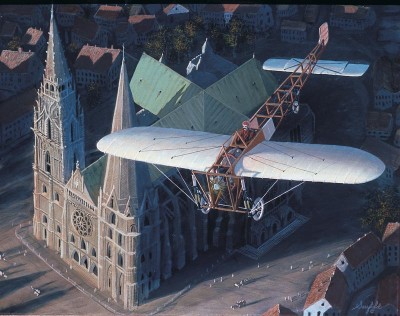 The collaborative genius of Orville and Wilbur Wright completely transcended the efforts of all of their predecessors in the field of aviation. Not only had they leaped beyond the most advanced innovator of the day, Otto Lilienthal, they corrected the errors they had found in his mathematical tables.

On December 17, 1903, the Wright brothers' four flights carried them into the record books as the first to make a controlled powered flight, and established them as being far ahead of all competitors in Europe.

The links below provide details and specifications for early classic airplanes:

Learn about the Wright brothers' first powered flight, which took place on December 17, 1903. Their first airplane, the Kitty Hawk Flyer, was the world's first military aircraft.

The need for speed and the powerful engines of the Bleriot XI led to the tragic deaths of many famous pilots, including America's first licensed female pilot. Get the details here.

Sometimes called the Gold Bug, this classic airplane was built by Glenn Hammond Curtiss and was inspired by the Wright Flyer. Spot the differences and similarities between the Golden Flyer and the Wright Flyer in this article.

The Wright brothers would demonstrate their leadership in the next five years, only to lose it suddenly and dramatically to new ideas from abroad. Follow links to classic European airplanes of World War I on the next page.