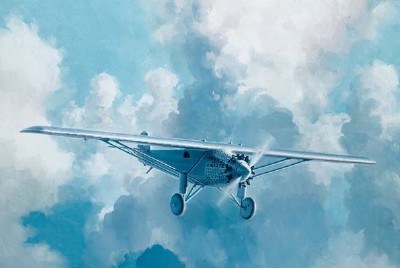 The excitement and infinite promise of flight during the Golden Age was exemplified by the Ryan NYP Spirit of St. Louis, piloted famously in 1927 by Charles Lindbergh.
pil

The first two decades after World War I, known as the Golden Age of Flight, saw the appearance of some of the most beautiful and most efficient aircraft in history. All over the world, regardless of their country's size or its relative wealth, aircraft designers were busy producing the very best aircraft they could conceive.

The Golden Age of Flight was a time when much could be done with relatively small resources, as when the Granville brothers designed an aircraft in an aban­doned dance hall, and witnessed it suddenly become a world-beater.

Follow these links to classic airplanes of the Golden Age:

Find out how this classic airplane, considered the Rodney Dangerfield of fighter planes, surprised the German Luftwaffes and the rest of the world during World War II.

The American Martin B-10 bomber plane is held as the most important and beautiful contributions to the Golden Age of Flight. Learn why in this article.

Henry Ford, a name commonly associated with classic cars, turned his talents toward classic airplanes in 1924. Read all about the Ford "Tin Goose" Tri-Motor.

In 1927, Charles Lindbergh and the Spirit of St. Louis successfully flew the first non-stop solo flight across the Atlantic. Learn about the legend here.

"Aviatrix" Amelia Earhart shared many firsts with the Lockheed Vega, including the first successful flight from Hawaii to California. Find out why she chose this classic airplane for her flying adventures.

An effective light bomber, a trainer and a seaplane, the Hawker Hart was a classic airplane with many accomplishments. Explore the many sides of the Hawker Hart.

With its economical price, the Piper J-3 Cub helped democratize civil aviation. Read about the classic airplane that earned its place as "an American classic in peace and war."

See specifications for the Beech Model 17, a classic airplane launched at the very depth of the Depression and which got its nickname from the reverse stagger of its wings.

The Gee Bee was built for the 1932 air-racing season and, flown by pilot Jimmy Doolittle, quickly became America's sweetheart. Get a closer look into the adventures of this classic airplane.

With the ability to make saltwater landings in exotic places, the "flying boat" took passengers throughout the Pacific for attractive scenery. Discover the glamor of this classic airplane.

By the time World War II began, the progress of aviation had taken many great leaps forward. Move on to the next page for links to classic World War II fighter airplanes.