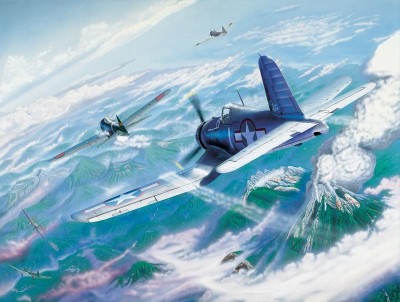 A carrier-based F4U Corsair bears down relentlessly on a pair of Japanese Zeros in a heated moment during the Pacific air war.
pil

World War II accelerated the pace of aviation at an even faster rate than World War I, and on a far greater scale. Aviation was in its infancy prior to the First World War, and almost all of the pro­g­ress in establishing an aviation industry and in determining the uses of air power took place as the war was going on.

Aviation progress had a running start beginning in 1939, so it was possible for aviation to make great strides not only in aircraft performance but also in many new disciplines required to fight an air war. The field saw advancements in navigation, radar, communications and improved ordnance.

This classic airplane started life as the best-selling airliner of its day, placing the U.S. in the lead in commercial aviation. Learn how the C-47 became one of the most effective warplanes in history.

The P-38 was the only U.S. fighter plane that was produced prewar and continued to be produced when the war ended. Find out what made this classic plane so intriguing.

Read about a classic German airplane that was beautiful, versatile, and considered one of the best fighter airplanes of World War II.

The most famous B-29 was the Enola Gay, which dropped an atomic bomb on Hiroshima and forced Japan to surrender, bringing World War II to an end.

Although slow, the Stuka proved incredibly effective as a German dive-bomber during World War II. Discover how this classic airplane fought bravely until the very end.

The Spitfire was a superior plane built by the Supermarine Company for the British Royal Air Force. Get details on this handsome hero of World War II.

Learn about the four-engine "Flying Fortress," aptly named for its ability to survive damage during bombing missions and still return safely.

The Wildcat started as an underdog and ended a champion, successfully taking down inferior Japanese bombers. See photos and specs in this article.

German engineers succeeded with their attempt to fit an enormous engine in a small airframe, resulting in the Bf 109 and 100 more variants of the original design.

A supreme dive-bomber of the Pacific War, the Dauntless is known for its efforts during the Battle of Midway -- sinking Japanese carriers and reversing the course of World War II.

Explore the details of the classic airplane flown by Lt. Col. Jimmy Doolittle during the first bombing raid against Tokyo in April 1942.

The P-40 served in all theaters of World War II, including the Pacific, Alaska, Africa, and Russia, and is famous for its performance with the AVG Flying Tigers.

The Liberator was vital to the American effort in World War II -- its many roles included bombing, special operations, and carrying cargo and passengers. Learn more here.

Read about the Japanese Zero, a symbol of Imperial Japan that succeeded early on in the war only to be surpassed by continually improving American aircrafts and pilots.

The Hellcat's first appearance in World War II battle was during the U.S. attack against the Japanese on Marcus Island in September 1943.

Yak-9s were flown bravely by the Soviets against German fighters. Learn why this classic plane proved faster and more maneuverable than German Bf 109s.

Also called the "Bent-wing Bird," the F4U Corsair dominated Japanese enemies in World War II and went on to serve in the Korean War.

The Mustang classic airplane had the ability to defeat every Axis fighter it encountered. Learn about it's history and the many restored models that still fly today.

If the production of the German Me 262 had not been delayed, the outcome of World War II might have changed drastically. Learn how this classic airplane could have altered history.

The classic fighter planes of World War II will always be remembered as brave warriors, but the arrival of the Jet Age changed the way we see aircraft. Follow the links on the next page for more details.