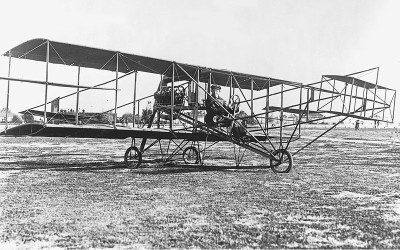 Glenn Hammond Curtiss, creator of the Golden Flyer, was similar in many ways to the classic airplane innovators the Wright Brothers, who always regarded him as their most dangerous rival. Curtiss was a man of great common sense who had grown up on bicycles and then progressed to building motorcycles and engines.

The reputation of his engines for high performance led to a relationship with Alexander Graham Bell, who formed the Aircraft Experiment Association in 1907 to develop a flying machine. Other members of the Association included F.W. "Casey" Baldwin, J.A. McCurdy, and Lt. Thomas E. Selfridge, who would die in the crash of the Wright Military Flyer in 1908. The Association produced four "Aerodromes," and Curtiss was influential in the design of all of those classic airplanes.

The first Curtiss aircraft was the Golden Flyer (sometimes called the Gold Bug), purchased by the Aeronautical Society of New York on March 2, 1909, for $5,000. The golden tint of the varnish on the fabric covering of the Golden Flyer's wings and tail inspired the name. It followed typical Curtiss practice as an equal-span biplane, with a four-cylinder Curtiss pusher engine directly driving a single propeller. In an attempt to avoid infringing upon the Wright patent, Curtiss used ailerons set between the Golden Flyer's biplane wings instead of wing warping. Nevertheless, the Wrights felt they had been wronged, and they instigated a long series of lawsuits, to the great disadvantage of both parties.

Early powered flight was a novelty that inevitably attracted onlookers, as in this circa 1910 scene of a graceful Golden Flyer.

Unlike the Wrights, Curtiss did not disdain aerial competitions and quests for records. He built a larger version of the Golden Flyer for the 1909 Gordon Bennett Cup Race in France, secretly powering it with a 60-horsepower V-8 engine of his own design. The Reims Racer was a tremendous success, setting a world record speed of 43.35 miles per hour and beating the biggest names in aviation. In this classic airplane competition, Curtiss came out on top.