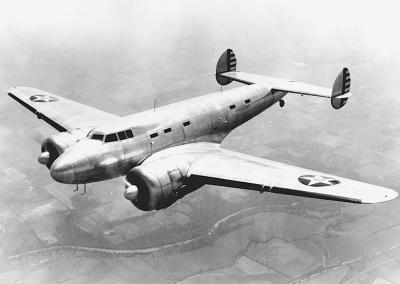 The Lockheed XC-35 was a very successful aircraft that was also the first with a pressurized cabin.
Peter M. Bowers Collection

August 22, 1936 Charles Ward Hall, founder of Hall Aluminum Aircraft, is killed in the crash of an aircraft of his own design, the "Monoped."

September 4, 1936 Ben O. Howard and his wife, Maxine, are seriously injured in the crash of their racer, Mr. Mulligan.

December 9, 1936 Juan de la Cierva is killed in the crash of a KLM airliner.

December 21, 1936 The prototype Junkers Ju 88, the most versatile of the German bombers, makes its first flight.

January 13, 1937 Martin Johnson, a famous flying explorer, dies in the crash of a Western Air Express plane near Los Angeles.

January 30, 1937 The Hall XPTBH-2 twin-float torpedo plane is delivered to the Navy.

February 9, 1937 The first British dive-bomber, the Blackburn Skua, flies for the first time.

March 5, 1937 Allegheny Airlines is formed (it will later become USAir).

March 17, 1937 Amelia Earhart blows a tire when she tries to take off from Hawaii for her proposed world flight. She has to reschedule.

April 30, 1937 The Nationalist battleship España is reportedly sunk by the Republican air force.

May 6, 1937 The Hindenburg explodes at Lakehurst, New Jersey, while attempting to land.