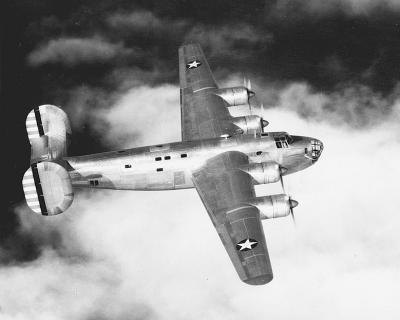 The XB-24 quickly became a hit after it was first introduced.
Warren M. Bodie Collection

May 9, 1939 Dale White and Chauncey Spencer seek to include African Americans in air-training programs.

July 6, 1939 The first scheduled airmail service takes place with a rotary-wing aircraft, a Kellett KD-1B, in Eastern Airlines markings, between Philadelphia and Camden, New Jersey. The aircraft was flown by Captain John Miller.

December 30, 1939 The Ilyushin Il-2 prototype flies for the first time.

May 10, 1940 The German invasion of Belgium and Holland begins.

June 8, 1940 The carrier HMS Glorious is sunk by the Scharnhorst, a German battleship.

August 17, 1940 Pilot Officer William M. L. Fiske becomes the first American to die in the service of the RAF.

October 8, 1940 Form­­ation of the Eagle Squadron with American pilots is announced.

November 11, 1940 The Italian Air Force makes its first and only attack on England.

­November 11, 1940 England scores a great victory at Taranto, Italy, with the Fairey Swordfish.