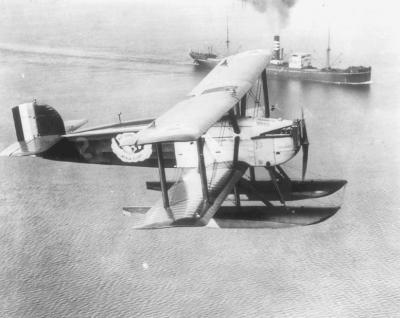 The Douglas Aircraft Company was boosted into the big time with the successful round-the-world flight of its Douglas World Cruisers in 1924. See more ­flight pictures.
Peter M. Bowers Collection

May 1924 The Fokker C V makes its first flight.

July 1, 1924 TAT, in cooperation with the Pennsylvania railroad, begins transcontinental travel--air by day, train by night.

August 1924 The Savoia-Marchetti S.55 flies for the first time.

August 24, 1924 The dirigible ZR-3 is completed in Germany for war reparations. Delivery to the United States is scheduled for October.

September 28, 1924 Two Douglas World Cruisers land in Seattle to complete the first flight around the world.

December 15, 1924 A Sperry Messenger successfully makes an aerial hookup onto the trapeze of the U.S. Army Airship TC-3.

1925 The French Potez 25, a general-purpose biplane, makes its first flight.

January 3, 1925 The Fairey Fox flies for the first time, revolutionizing RAF thinking on engines and aircraft.

January 24-25, 1925 Scientists in 25 aircraft fly above the clouds to view a total eclipse of the sun. The new USS Los Angeles (ZR-3) carries Naval Observatory scientists.

April 8, 1925 The first night carrier landings are made on the USS Langley.

July 7, 1925 The first Boeing 40A flies, establishing Boeing in the airmail business.

August 31-September 10, 1925 Commander John Rogers attempts to fly from San Francisco to Hawaii in a PN-9 patrol plane. Forced down at sea, he travels 450 miles by sail for ten days until he is picked up.

September 3, 1925 The USS Shenandoah is torn apart by a line squall when ordered to fly into a stormy area by official flight orders.

September 4, 1925 The tri-motor Fokker F VIIa/3m flies. It will become important all over the world.

October 27, 1925 Lieutenant Jimmy Doolittle sets an official world speed record for seaplanes in a Curtiss R3C-2 at 242.166 miles per hour.