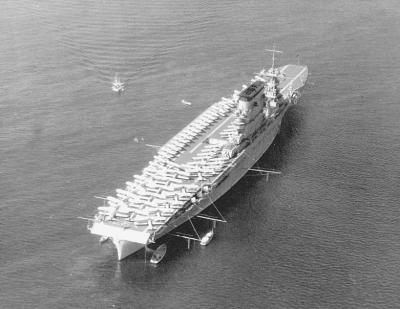 August 1927 The first Huff-Daland bombers are delivered to the Air Corps.

October 12, 1927 Wright Field is dedicated; it becomes the primary research and development site for the Air Corps.

October 14-15, 1927 Dieudonné Costes and Joseph Le Brix make the first nonstop crossing of the South Atlantic in a Breguet 19.

November 16, 1927 The USS Saratoga, an aircraft carrier, is commissioned.

December 14, 1927 The USS Lexington, an aircraft carrier, is commissioned.

1928 The NACA develops a cowling for radial engines.

February 28, 1928 The Navy contracts with Consolidated for the XPY-1, the first U.S. monoplane flying boat.

May 16, 1928 Transcontinental Air Transport (TAT), the predecessor of TWA, is formed.

May 23, 1928 The tragic flight of Italian airship Italia begins.

September 18, 1928 The Graf Zeppelin, the world's most successful dirigible, is launched.

November 14, 1928 The Fairey Long-Range Monoplane flies. It will set many records.

December 19, 1928 The first American autogiro, the Pitcairn, is flown.