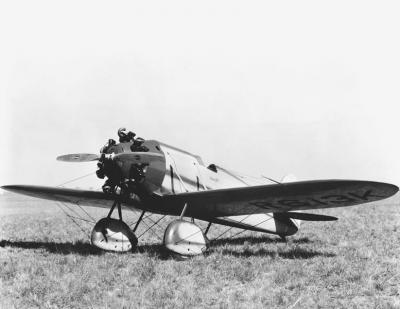 The "Mystery Ship" set a speed record for women when it reached 196.1 miles per hour.
Peter M. Bowers Collection

September 1, 1930 Speed Holman wins the first Thompson Trophy in a Laird "Solution" at 201.9 miles per hour.

October 1930 The Polish PZL P-7 fighter appears; the Polish Air Force becomes the first in the world with an all-metal monoplane fighter squadron.

October 13, 1930 The prototype Junkers Ju 52, one of the most famous transports in history, flies.

December 22, 1930 The Tupelov TB-3, a standard Soviet four-engine bomber, flies for the first time. It is the largest airplane in the world at the time.

January 7, 1931 Beryl Hart and Lieutenant Bill MacClaren are lost in a transatlantic attempt.

March 25, 1931 The first production model of the Hawker Fury flies.

March 26, 1931 Swissair is formed. The airline will push the pace of European transport lines.

March 31, 1931 Knute Rockne is killed in the crash of a Fokker transport, sealing the fate of wooden transport aircraft in America.