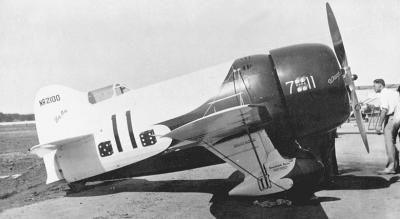 The Granville brothers of Springfield, Massachusetts, had gone from obscurity to fame with the success of their original Gee Bee Model Z.
Peter M. Bowers Collection

May 20-21, 1932 In a Lockheed Vega, Amelia Earhart becomes the first woman to fly solo across the Atlantic.

July 21, 1932 Von Gronau and the crew of his Dornier Wal complete a round-the-world flight in 111 days--the first in a flying boat.

September 3, 1932 Jimmy Doolittle ends his racing career, winning the Thompson Trophy at 252.6 miles per hour, then setting a world speed record for landplanes of 296.287 miles per hour.

January 26, 1933 The Institute of Aeronautical Sciences is founded.

February 8, 1933 The Boeing Model 247 transport, a development of the Monomail and the YB-9, makes its first flight.

April 4, 1933 The dirigible Akron crashes into the sea off the New Jersey coast. Seventy-three people die.