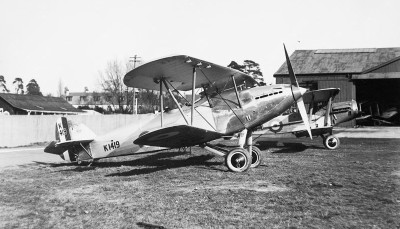 Although the fabric-covered metal frame of the Hawker Hart was lightweight, it was strong, as well. The wings were of different lengths, with the upper wing swept back slightly. See more classic airplane pictures.

The great British firm that produced so many beautiful Hawker Hawk classic airplanes was founded in 1920 by none other than T.O.M. Sopwith himself, the man who had created the famous line of Sopwith fighters during World War I. Sopwith would gather about him great engineers and great test pilots, one of whom, Sydney Camm, created some of the highest performing, most aesthetically satisfying classic airplanes in history.

Delightful to fly, rugged, and inexpensive, Sir Sydney Camm's Hawker Hart was one of the great classic aircraft of the Golden Age. Both Sopwith and Camm would be knighted for their services to aviation.

The Hawker Hart entered RAF service at the end of 1929 (some sources claim January 1930).

Camm joined Hawker in 1921, after a career that had begun in model building and extended into competition and design. His first effort was the tiny 375-pound Cygnet, but he would become famous for his lovely biplanes, and later for his fierce monoplanes, and finally, his advanced jets.

Besides being an effective light bomber, the Hawker Hart excelled as a trainer and as a seaplane, with floats replacing the fixed landing gear.

So appealing was the Hart that it was sold to Sweden, Estonia, Egypt, and elsewhere. It served the RAF in India until 1939.

Both classic airplanes had extremely clean lines and employed the new Rolls-Royce F.XI engine, which lent itself both to streamlining and to the creation of a gorgeous roar when its throttle was moved forward. The Hart was 30 miles per hour faster than current front-line British fighters, and so sound was its basic biplane design that a number of aircraft were developed from it, including the two-seat Demon fighter. The fabric-covered, metal structure of all the Hawker biplanes was inherently strong, and lent itself to clean lines that obtained the maximum speed available from the Rolls-Royce engines.

The Hawker Hart was deployed throughout the British empire, serving in India and the Middle East well into World War II. Its design was adapted to a variety of engines; a Hart tested the Merlin engine installation that was subsequently used on the immortal Hawker Hurricane.