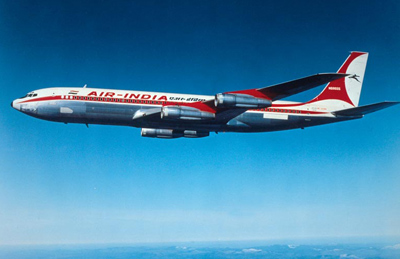 The Boeing 707 is a passenger jet first developed in the 1950s. It was one of the first commercially successful airliners. See more pictures of flight.
NASA

The end of the Korean War found the world locked in an uneasy peace. The Cold War continually threatened to get hot, particularly when minor or major rebellions against the oppressive Soviet Union took place in East Germany, Hungary, or Czechoslovakia.

One benefactor of the tension was the arms industry, which, among other products, fielded a seemingly endless series of ever more capable warplanes. These included the Century Series fighters, such as Lockheed's F-104 Starfighter, known as the "Missile with a Man in It"; the Republic F-105 Thunderchief; and the McDonnell F-4, which was briefly known as the F-110 in the USAF. Larger aircraft were not neglected; the Boeing B-52 entered service to replace its formidable older brother, the B-47, and the KC-135 filled the indispensable air refueling role. Air refueling began as an essential tool for bombers but soon adapted to fighters and eventually to cargo planes and helicopters. All found it equally indispensable.

­­The B-52 and the KC-135 would become the backbone of the Strategic Air Command (SAC), the most powerful armed force in history. General Curtis E. LeMay commanded the SAC, and it was his goal to make the United States so unquestionably powerful that no nation would dare attack it with nuclear weapons. He succeeded remarkably.

The Soviet Union experienced a similar explosion of new military types. MiG fighters and Tupolev bombers were produced in great numbers and exported to all the Soviet satellite countries. The Soviet Union also demonstrated its military prowess in a continuing series of tests of both atomic and thermonuclear bombs.

The jet age came to passengers as well. There was an initial dark cloud when an unforeseen metal-fatigue problem led to the crash of three de Havilland Comet transports, prompting their subsequent removal from service. But Boeing, which had significant experience with pressurized aircraft such as the B-29 and B-50, had no problems with the introduction of its revolutionary 707. The Soviet Union used technology derived from captured B-29s to design their first passenger liner, the Tupolev Tu-104. The airline world was bowled over by the comfort, performance, and economy of the new jets. A revolution in travel was set in motion as both railroads and ocean liners were eclipsed by jet airliners.