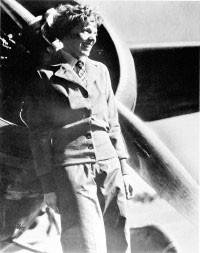 ­Most famous of all Lockheed Vega pilots was "aviatrix" Amelia Earhart.

The Lockheed Vega classic airplane received accolades when it was introduced in 1927. While the fabric-covered Spirit of St. Louis was conventional in every way, particularly in its strut-braced wing and landing gear, Jack Northrop would break new ground with his magnificent design of the Vega.

The Lockheed Vega, which first flew on July 4, 1927, at the crest of the Lindbergh euphoria, was an all-wood, high-cantilever monoplane with a beautiful streamlined monocoque fuselage (stress carried by the outer skin).

­­­It receiv­­ed immediate acclaim for its outstanding looks and high performance, and was purchased by George Hearst to compete in the ill-fated Dole Race from Oakland to Haw­aii. Beautifully painted and named the Golden Eagle, the first Vega classic airplane and its crew of two disappeared at sea.

The sheer performance of the aircraft brought orders from the most famous pilots in the world. The Vega became the aircraft of choice for Arctic exploration, ocean flights, airline use, and attempts to break aviation records.

Wiley Post, the clever, one-eyed pilot from the Oklahoma oil fields, made his Vega, the Winnie Mae, famous in a pair of record-setting around-the-world flights. The first was in company with Harold Gatty as navigator, and the second was solo. Post also used the Winnie Mae for some radically experimental high-altitude work.

Amelia Earhart used a bright red Vega to become the first woman to fly the Atlantic in 1932. She later set other records in a Vega, including the first Hawaii-to-United States flight.

The Northrop and Gerard Vultee corporations extended the basic design, using the same types of wing and fuselage construction to create both parasol and low-wing variants, some with retractable landing gear. One of the most famous of these was the Sirius, a low-wing version capable of being fitted with floats. It was used by Charles and Anne Lindbergh in a pioneering series of route-exploration flights.

All three of these famous Lockheeds are on exhibit at the National Air and Space Museum, an honor accorded no other design.

For more information on classic airplanes, check out: