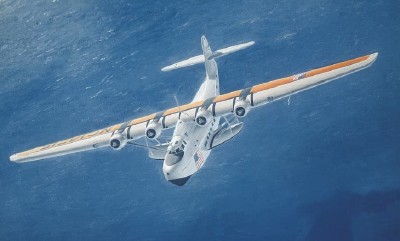 Every epoch seems to have a mode of transportation that symbolizes utter glamour, from the Orient Express to the Concorde. In the 1930s, it was the Martin Model 130 China Clipper.

Pan American's great leader, Juan Trippe, used the Clippers to blaze an 8,200-mile trail across the Pacific, from Oakland to Manila, with stops at Hawaii, Midway, Wake, and Guam. Total flying time was 60 hours, spread over five days. Tickets were very expensive, with round-trip fares costing $1,600 -- the equivalent of perhaps $10,000 today.

All three Model 130s were lost in crashes. The Hawaii Clipper disappeared under very mysterious circumstances in July 1938 -- nothing has ever been found of the plane, and some still suspect foul play by the Japanese. The Philippine Clipper crashed into a mountain in bad weather in 1943. The Martin Model 130 China Clipper had a distinguished war record, but crashed in 1945, after flying more than 3 million miles. Despite these violent mishaps, all three Model 130s live on in legend and in history.

The Clippers were four-engine, all-metal flying boats that used an innovative air-filled "sponson" rather than wing-tip floats for stability on the water. The Clippers' clean design gave them great range. Because the aircraft were not pressurized, they generally flew at about 8,000 feet. They were noisy, as all airplanes were in those days, but passengers nevertheless considered them quite luxurious.

Passengers: 8 (on San Francisco-Hawaii run); 46 (number of seats on board for local flights)